With mobile gaming becoming increasingly popular, it isn’t surprising that phone makers are doing all they can to usurp one another when it comes to churning out devices with optimum gaming experience, powerful hardware, and software optimizations. Samsungs effort at doing this dates back to the time of the Galaxy S7, and more recently the Galaxy Note 9 when it announced an exclusive deal with makers of Epic games.

Now, the Korean firm looks set to boasting its gaming performance acceleration effort with the launch of a dedicated AI based GPU booster. The firm has now a trademarked the ‘Neuro Game Booster’ with the European Union Intellectual Property Office (UIPO) in the EU. As it is suggestive of the name, the Korean firm is clearly looking at taking on Huawei’s own GPU turbo.

Details of the trademark read: ‘Software for smartphones; … Computer application software featuring games and gaming; Artificial intelligence software. There are no details on how the tech will work, but it is apparent it will employ AI to intelligently allocate system resources and boost the gaming performance. 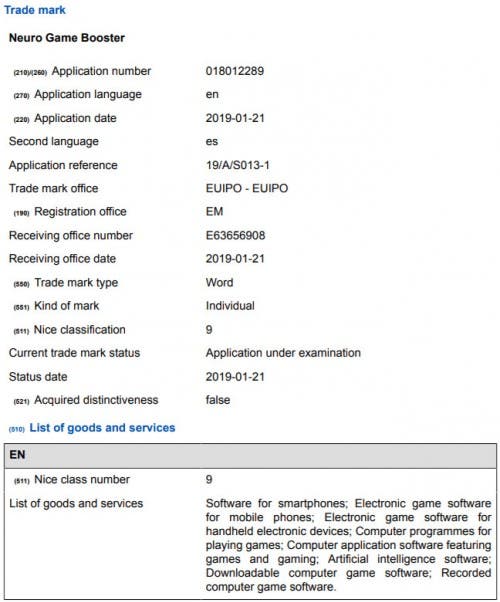 Samsung has a couple of upcoming devices that could launch with SoC that places special emphasis on improved NPU, however, the timing of this trademark suggest the Galaxy S10 with its Exynos 9820 SoC will most likely be the first to benefit from the latest innovation.