Unconfirmed report which hit the rumor mill today suggests that Chinese manufacturer, Meizu is preparing for a press conference in Beijing where it will release the expectedMeizu Note 9. Amongst other things, this smartphone will be equipped with a Snapdragon 675 processor, 48MP Samsung GM 1 camera and its price will be in the 1000 Yuan range ($148). At present, a new Meizu smartphone with model number M923Q got a Bluetooth certification ad it is believed that this is the upcoming Meizu Note 9. 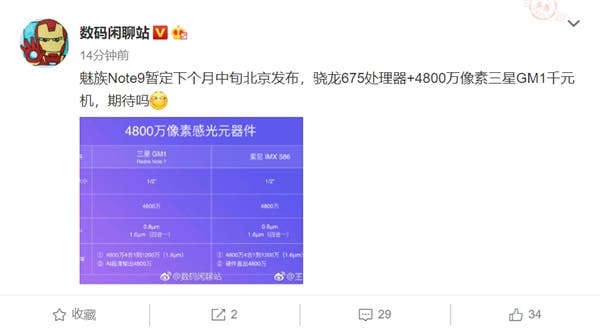 According to the information disclosed by Huang Zhang, the founder of Meizu Technology, Meizu Note 9 is equipped with a 48-megapixel camera, which will be the first 48MP mobile phone from Meizu. In addition, Huang Zhang also revealed that Meizu Note 9 will come with an SD675 SoC and it scores over 170,000 on AnTuTu.

Qualcomm Snapdragon 6150 is the internal code of SD675. Not many smartphones use this chip for now and its performance should be better than the SD660. It is based on the 11nm process technology and it uses Qualcomm’s fourth-generation Kryo 460 architecture. The GPU is Adreno 612. Huang Zhang revealed that Meizu Note 9 runs over 170,000 points and it will be equipped with a 4000mAh battery. The battery life is worth looking forward to.