Since the announcement of Redmi as a subsidiary brand of Xiaomi, the rumor mill started to spread some tidbits about a Redmi Go smartphone. After some leaks confirming the existence of the handset, a new render leaked along with the full specs of the entry-level handset, leaving nothing to the imagination. The phone already has been certified in a number of markets and apparently, the Philippines will be the first country to receive it.

The smartphone also made an appearance through a Poster on Lazada’s online store. This reveals the phone’s entire design as well as the full specifications of this Android Go smartphone. The poster also carries the same “Go Smart, Do More” message, so we should assume that both Facebook and Lazada are talking about the same smartphone. 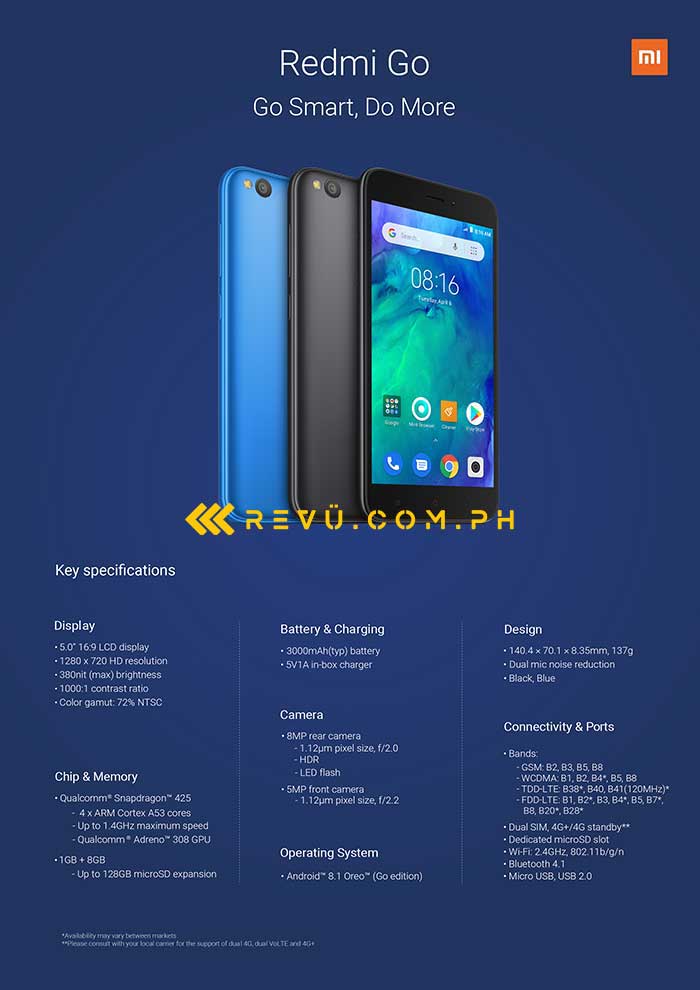 The smartphone will resemble the Redmi 4a/5a smartphone when it comes to the design, but the specifications are far lesser than the duo of old entry smartphones. The smartphone will be packed with a 5.0-inch HD display with a standard 16:9 aspect ratio and 380 nits of brightness. The processing power will be ensured by the old Snapdragon 425 that will come paired with just 1GB of RAM and 8GB of Storage, worth noting that it will offer microSD support. Those are very modest specs for Redmi smartphones since they are pretty known for offering a good value for money. So we’re particularly curious to see how aggressively low this handset will be priced.

The Redmi Go doesn’t come with rear speakers, that should be placed at the bottom along with the micro USB port. The Redmi Go has an 8MP f/2.0 camera with HDR and an LED flash on the back. The camera is positioned at the top left corner of the phone. It also carries a 5MP f/2.2 front-facing camera. Bluetooth 4.1 will be included in the package, along with a single-band Wi-Fi (2.4GHz), the handset will also offer Dual-SIM support. The LTE connectivity will include support for bands 1, 2, 3, 4, 5, 7, 8, 20, and 28.

Last, but not least, the handset comes with a 3,000mah battery that supports standard 5V/1A charging. Unfortunately, the smartphone seems to run Android 8.1 Oreo (Go edition) and not the latest Pie. The handset will be available in Blue and Black colors, but the price is yet to be revealed since the Lazada’s price is just a placeholder. Judging by the specs and Redmi’s aggressive strategy, the price should range from $60 to $90.

Previous Facebook discontinues Moments App due to lack of interest