With  Android 9.0 Pie update steadily finding its way to more and more Android smartphones, all eyes are now set on the Android Q development which may not be publicly available until the latter half of this year. Google, of course, will be the first to use the upcoming Android Q on its Pixel smartphones, so it isn’t surprising seeing that the firm is already trying out a couple of devices with the developers build of the next Android iteration. 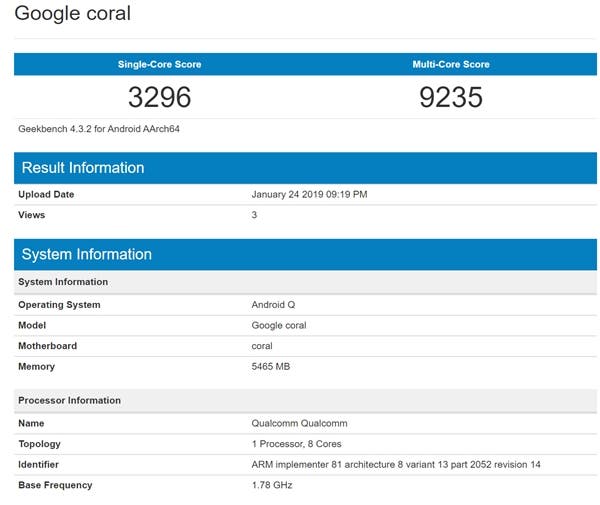 A variant of Google Pixel 3 XL and the Xiaomi Mi 8 SE were previously spotted running the Android Q on the popular Geekebnch, and now, another upcoming device from Google has pop up running the unreleased Android Q. The device is dubbed Google Coral, which certainly is a codename of an upcoming device. There are speculations that the device could be an upcoming Chromebook model that could arrive alongside the next iteration of the Pixel smartphones.

Aside from running Android Q, the Google Coral as per the Geekbench listing will come with the latest Qualcomm Snapdragon 855 7nm octa-core SoC coupled with 6GB of RAM with a 3,296 single-core score and 9,235 multi-core score.

While it appears too early to speculate anything about Android Q, early reports suggest the next Android version might come with a system-wide dark mode, desktop / external display mode similar to Samsung’s DeX as well as a privacy option that  should allow users to customize the permissions on their device to a greater extent, locking off areas of their phones or turning off locations for specific apps.