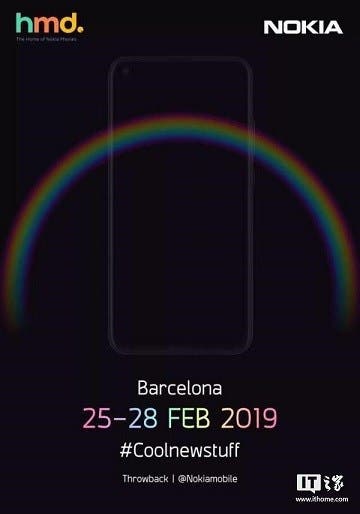 Now another MWC 2019 poster from HMD just appeared online and it suggests that the company may be having more than just the Nokia 9 PureView to unveil in the event. The poster shows a smartphone with a punch-hole camera. From the rumors and speculations so far, the Nokia  9 PureView does not use a punch-hole camera thus the company most likely has a smartphone with this design to show us at MWC 2019.

According to previous reports, in addition to Nokia 9 PureView, HMD will also launch Nokia 6.2 and Nokia 8.1 Plus and both smartphones comes with a punch-hole design. This poster suggests that at least one of these smartphones will meet with us at MWC 2019.

The Nokia 6.2 will be equipped with a 6.2-inch large display. It is powered by a Snapdragon 632 processor, coupled with 4GB/6GB of RAM. It comes with Android 9 Pie pre-installed. At the beginning of this month, @OnLeaks released the rendering of Nokia 8.1 Plus. The machine is equipped with two ZEISS certified lenses and a fingerprint sensor. It also has a USB-C interface.