Chinese smartphone maker and member of the BBK group OPPO is reportedly getting ready to unveil some devices both in China and India. Among them is the pocket-friendly OPPO phone with in-display fingerprint sensor heading to India, the OPPO phone with pop up camera that surfaced earlier on, and now we are getting proof that there may also be one more flagship device in the making.

We say so because the Chinse phone maker recently filed a patent application for the protection of the FIND Z moniker with the with the European Union Intellectual Property Office. Sadly, we know nothing else about the patented name, and while the move could just be for precautionary move alone, there are indications that the name might be for the next flagship phone from the company and the sequel to the OPPO Find X from 2018.

Announced back in June 2018, the OPPO Find X caused a stir in the smartphone scene with its groundbreaking design, pop-up camera, and notch-free, bezel-free display. Whether the device is due for a refresh or not remains to be known, however, recent reports say a possible successor to the Find X is already in the works and could be the OPPO phone codenamed “Poseidon which recently appeared on the Geekbench database. The OPPO Poseidon will reportedly arrive as the Oppo Find Z. Another possibility is that the brand could need the name to assign to one of its devices for the EU market since the brand is already selling phones in the EU. 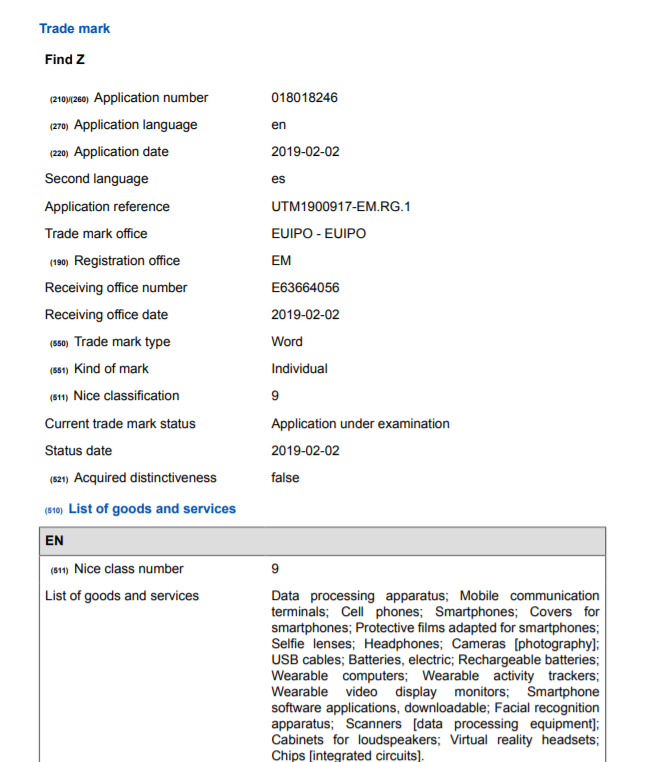 That may not be the case, though, and we won’t find out until we get some more convincing information relating to the OPPO FIND Z name.

Next Honor 10 Lite hits the market with powerbank & selfiestick freebies