The entire Galaxy S10 lineup is expected to go official at a special event on February 20 in San Francisco, California, and as we inch closer to that to the said date, leaks and rumors about the device are beginning to pour in. The latest info we have about the Galaxy S10 lineup comes from the US. FCC which has just certified the S10 device fit for use in the States.

The US. regulator has certified four models viz: Samsung SM-G970U, SM-G973U, and the SM-G975U all of which line up with the choice of Galaxy S10e, Galaxy S10, and the Galaxy S10+ respectively as we already know. A few things s we gleaned from the FCC documents include support for Bluetooth LE, NFC, MST, Wi-Fi 6 and notably their support for LTE on all major carriers in the States.

What’s more, the FCC confirmed that the 10th anniversary Galaxy S10 models will support reverse wireless charging and not just that, it even listed the max power – 9W – same as the Galaxy S9 and faster than supported Huawei phones which have been tested to be under 5W. The documents referred to the Galaxy S10 trio wireless charging as the  “Wireless Power Transfer” which is described as the Galaxy S10’s ability to “receive or transmit an AC power signal through magnetic induction (MI) or magnetic resonance (MR). 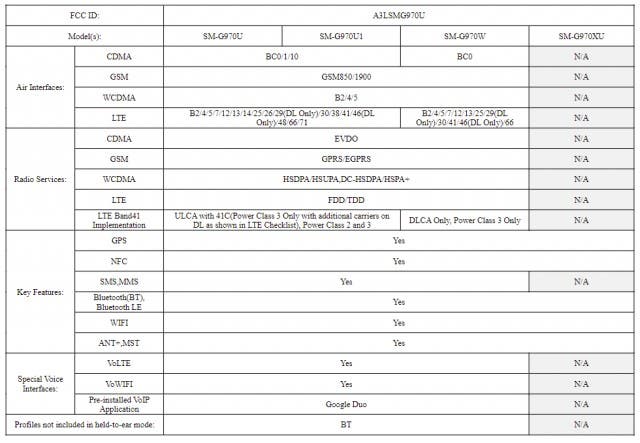 Samsung will announce the Galaxy S10 trio as well as its first foldable display smartphone, on February 20th in San Francisco, California. Pricing, roll out plans, as well as full specs details, will become obvious on the said date.