Lenovo owned Motorola in about a few hours from now will be taking the wrap off its next mid-range Moto G7 series, and while there has been a series of leaks and rumors including the recently bursted renders of the entire G7 lineup, a new Geekbench listing has at the last minute revealed some of the Moto G7 Plus basic details.

The Geekbench listing confirms that the Moto G7 plus much like the base Moto G7 and G7 power will boot Android 9.0 Pie out of the box.  Again, the Geekbench listing tells us the G7 Plus will come with the Qualcomm Snapdragon 660 SoC, and not the Snapdragon 632  as previously rumored. The SoC will be joined with 4GB of RAM for seamless performance.

The mid-range Moto G7 plus is so far rumored to come flaunting a 6.24-inch Full HD+ IPS LCD display along with a teardrop notch, a main 16MP camera paired with a secondary 5MP one, an 8MP selfie camera and 3000mAh battery. 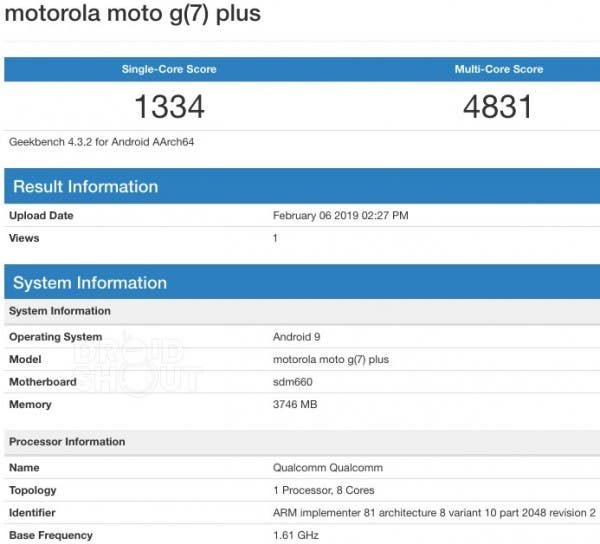 The Moto G7 plus will be announced alongside the Moto G7 and the battery touting Moto G7 power at an event later today in Brazil. We have seen rumored prices for various markets, but it would be appropriate to get the official details later today.