Whenever CEOs of manufacturing companies start talking about a particular aspect of smartphone development, it is most likely that the company has made a breakthrough in that aspect. In recent times, the camera department has been an area of focus for Chinese manufacturer, Xiaomi. A few days ago, Lei Jun hinted that the upcoming Xiaomi flagship will have something revolutionary in its selfie camera. Today, Lei Jun took to his Weibo account to talk about the Xiaomi camera department. He said that he is looking forward to the camera department putting a few big moves in 2019. 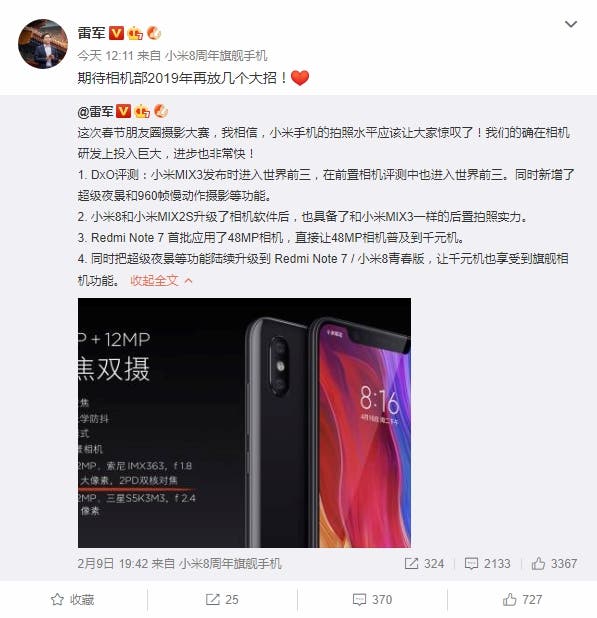 Lei Jun added that Xiaomi’s mobile phone camera level should be amazing this year because the company invested a lot in the camera development, and the progress was quite fast. Xiaomi’s CEO listed the progress of Xiaomi’s camera department as follows

Join GizChina on Telegram
Read Also:  Xiaomi 11i and 11i HyperCharge get Android 12-based MIUI 13 update

We are now looking towards the arrival of Xiaomi Mi 9. With the recent hints on the development of Xiaomi’s camera department, it is most likely that the camera of the Mi 9 will be optimized with some sorth of new feature. In addition, the designer who delivered Xiaomi Mi 6 is responsible for the Mi 9 design thus we can expect some changes from regular Xiaomi phones in its coming flagship.

Next Manufacturers to watch out for at MWC2019