We have had quite a number of leaks and teasers signaling the launch/arrival oF OPPO F11 Pro – OPPOs next device in the F series, so we know a number of things official or unofficial about the rumored device. While a more recent report from India has it that the OPPO F11 Pro is already available for pre-order, the brand has just revealed the F11 Pro launch date.

The company earlier today reportedly sent out media invites scheduling an event for March 5 where it will unveil the OPPO F11 Pro. The press event will take place in Mumbai, at 5.30pm. Aside from confirming the F11 Pro launch date, OPPO on its website revealed that the F11 Pro will come fitted with a 48-megapixel AI driven primary rear camera coupled with a 5-megapixel secondary shooter. OPPO is touting the devices Super Night Mode for enhanced low light photography.

While we are not sure of the battery size, OPPO says the Oppo F11 Pro will get VOOC 3.0 fast charging support, while some leaked images have in the recent past confirmed a display without a notch and bare minimum bezels, 3D gradient casing, and a rear fingerprint scanner. 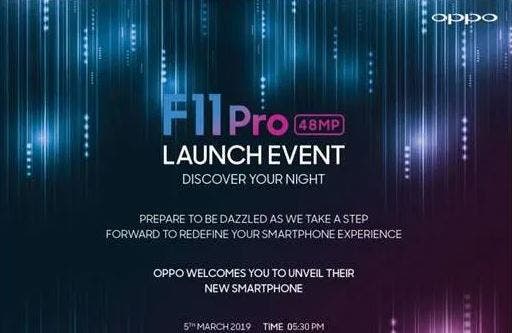 The highlight of the device, however, is the pop-out camera on top which is expected to house a 32-megapixel selfie camera, similar to the VIVO V15 Pro that just dropped. More teasers with additional specs details are expected to roll out in the coming days.

Next The Samsung Galaxy buds are here! Lets take a look...