TCL-owned  Alcatel stormed last year’s Mobile World Congress with a whole lot of phones, including three series of phones within which there are a total of five models. Those devices were decidedly low to mid-range models with no flagship, the firm could be making a come back at this year’s  Barcelona event if recent leaks from Evan Blass (@evleaks) is any indication.

The popular tipster was the first to have posted images as well as brief specs of last year’s Alcatel phone lineup that debuted at the MWC, and he is back again with similar revelation. The tipster has revealed images as well as brief specs of a couple of Alcatel phones that could be debuting soon at the MWC show in Barcelona. These are the Alcatel 1s, Alcatel 1V, Alcatel 3C, Alcatel 3S, Alcatel 3V and Alcatel 3 smartphones. Here’s the rundown: 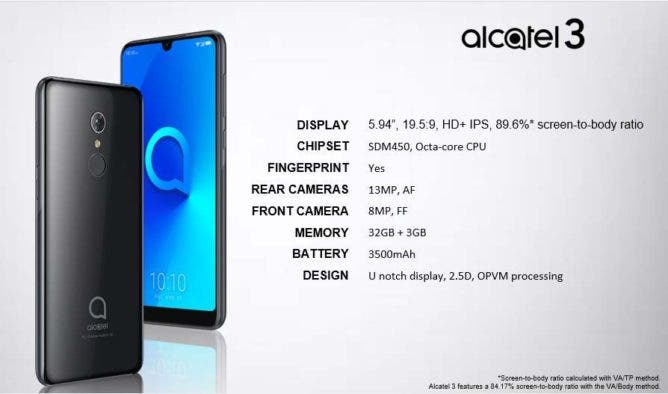 The Alcatel 3V is probably the most trendy of the bunch, though it’s nowhere near a  pricey or high-end device. It has a  5.94-inches display with reduced bezels on the three sides, and a screen-to-body ratio of 89.6% thanks in part to the U type just like that of the Essential PH-1. Under the hood, the Alcatel 3 2019 gets a Snapdragon 450 processor coupled with 3GB of RAM and 32GB of storage, while a single 13MP camera, an LED flash and fingerprint scanner sit at the back. The U type notch is home to an 8MP sensor. We are not sure what OS the Alcatel 3 (2019) runs on, but the specs sheet says the device has a 3500 beneath it. 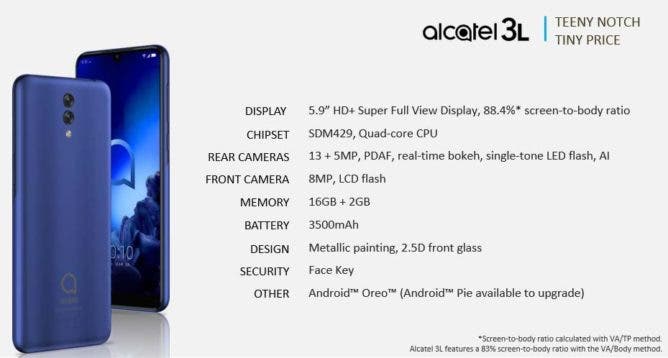 The Alcatel 3L is the only other notch bearing phone of the bunch featuring the same HD+ resolution as with the Alcatel 3, but with slightly smaller screen size – at 5.9-inches. Inside it is a slightly downgraded Snapdragon 429 along with only 2GB of RAM, and an expandable 16GB storage. It gets a 2.5D glass in front and a metallic rear finish. It sadly doesn’t have a fingerprint sensor, and what is more, it will boot Oreo out of the box, though it will be getting pie update probably on first boot.

Much the Alcatel 1C  Android Oreo (Go Edition) phone announced at this years CES, Alcatel is also introducing the 1V with same Googles light OS, but this time, the Alcatel 1V will boot the Pie Version of the Android, and as you will guess, the specifics are not head-turning.

It comes fitted with a 5.5-inch WVGA+ display with an 18:9 aspect ratio, but despite that, it still got some bezel on all four sides. It gets an unknow octa-core processor paired with 1GB of RAM and 16GB of storage, while an 8MP primary camera (interpolated to 13MP) and a 5MP camera (interpolated to 8MP) with its own LED flash in front. Surprisingly, the device also gets a rear fingerprint sensor and will be powered by a 2460mAh  battery. 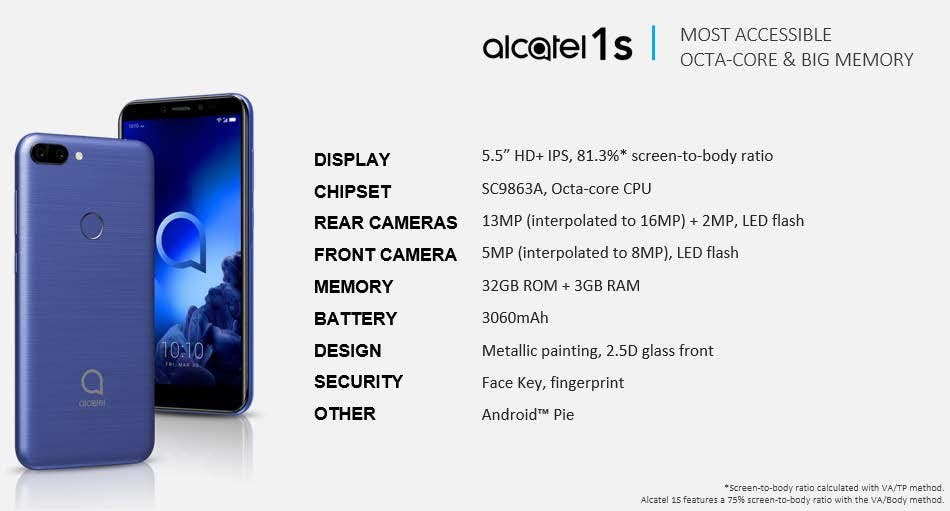 The Alcatel 1S is another entry-level device aimed at those on a very tight budget. The device is a plain-looking smartphone devoid of anything trendy. It features a 5.56-inch HD+ display with a screen-to-body ratio of 81.3%, and under the hood, it gets a Spreadtrum SC9863A SoC, consisting of 8x Cortex-A55 cores clocked at up to 1600 MHz coupled with 3GB RAM and 32GB storage. There are two cameras(16MP +  2MP sensor) as well as a fingerprint scanner at the back and is expected to boot Android Pie out of the box. 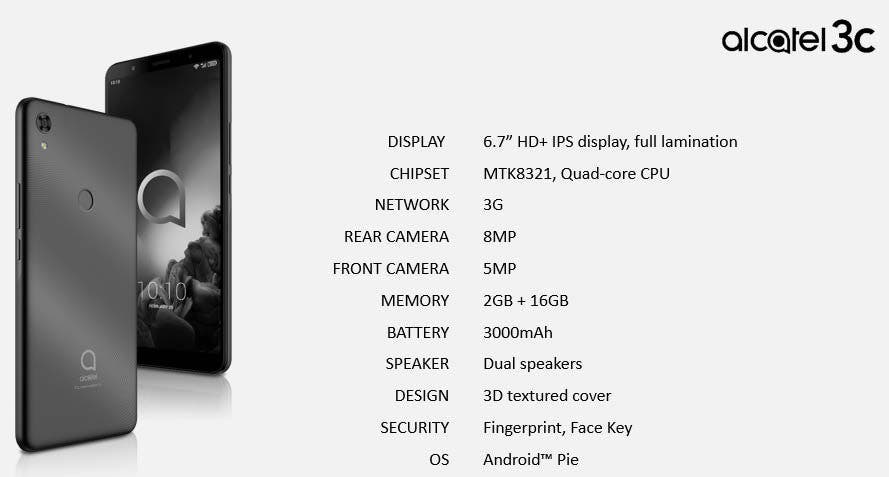 The Alcatel 3C is a somewhat stepped down variant of the Alcatel 3 (2019). It flaunts a fairly larger 6.7-inch HD+ IPS display with no notch and relatively thick bezels all around. It drops the SD SoC for MediaTek’s MTK8321 quad-core processor coupled with 2GB RAM and 16GB storage. There is a fingerprint sensor, as well as the Faceunlock, and will boot Android 9 Pie out of the box. 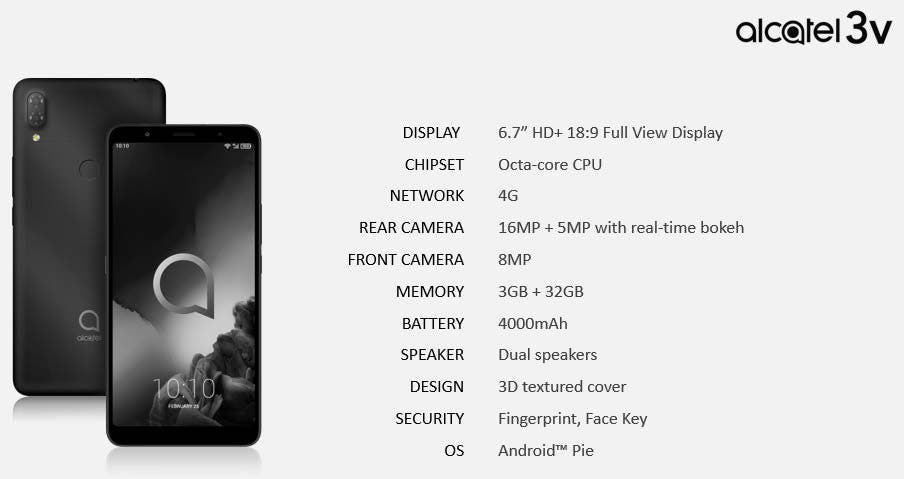 Alcatel is also beefing up last year’s model of the 3V with some niceties. The display is a bit more lager now at 6.7-inch HD+ 18:9 display with unnamed octa-core processor paired with 3GB of RAM and 32GB of storage as against last year’s 3V  Meditek SoC, 2GB RAM, and 16GB storage. The dual rear cam remains, but now a 16MP + 5MP combo, while the front camera gets upgraded to 8MP. Expectedly the new Alcatel 3V will boot Android Pie out of the box with an upgraded 4000mAh battery.

We have no official information on when these devices will drop, but there are claims that the company could showcase the smartphones at MWC 2019, which is set to take place in Barcelona, Spain on February 25.