Today, iQOO upcoming smartphone opened appointment on Jingdong Mall. This smartphone will be officially released on March 1. According to the official information, the iQOO device is equipped with a Qualcomm Snapdragon 855 flagship platform which is built on the 7nm process technology, adopting a new three-cluster eight-core architecture. Specifically, it has 1×2.84GHz super large core + 3×2.42GHz large core and a 4 × 1.8GHz small core composition. Its GPU is Adreno 640 and it runs up to 380,000 on AnTuTu. 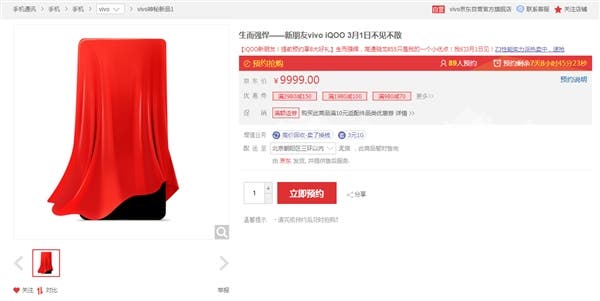 Not only that, this new smartphone is also equipped with 12GB of RAM and 256GB of internal storage. It has a 4000 mAh battery which supports 44W super fast charge using the USB Type-C interface.  The official stressed that Qualcomm Snapdragon 855 is only a small advantage of the new iQOO device, suggesting that there are more hidden features to be announced, just like its NFC compatibility. It is worth noting that the vice president of vivo and the head of iQOO brand, Feng Yufei, revealed in an interview with the media that iQOO is not a gaming mobile phone brand. It is a sub-brand of vivo and will release its own device under its name. As of now, there is no speculated price for this device.

Next OPPO’s Realme 3 will launch on March 4th