Not everyone is a fan of smartwatches, and companies are pretty aware of that. When the first smartwatch has introduced some thought that it would be a revolution like a smartphone was or the tablet was, however, it proved to be just a niche device for those who want to expand their experience with social media, or that want to monitor their health and track activities.

During the last three months of 2018 a total of 18 million smartwatches were shipped, an achievement that represents a new record and up to 56% increase year on year. As you might expect, half of those were Apple smartwatches, once again defining the Cupertino based company as the strong leader of the smartwatch segment. 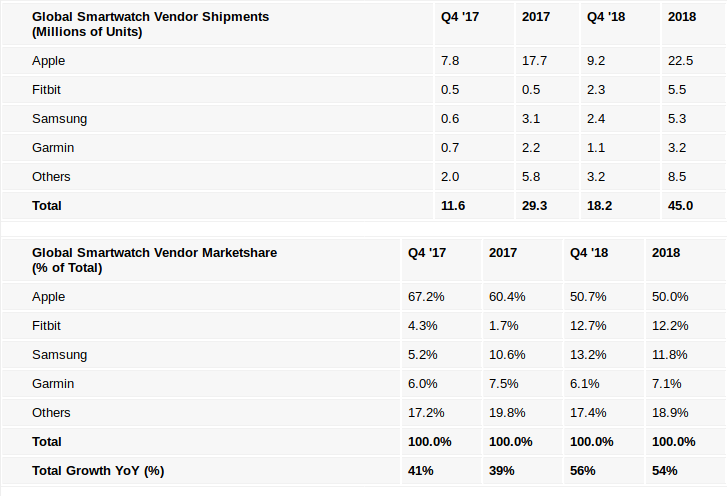 For the last year, the shipments rose to 45 million units and, again, Apple accounts for approximately 22.5 million of those wearables. In the second place, we have Fitbit with “just” 5.5 million, and Samsung in third place with 5.3 million. The two companies are really distant from Apple, and there’s no signal that this scenario will change in a near future.

During the final quarter of 2018, Samsung managed to edge out Fitbit since the Galaxy Watch achieved good numbers in North America and Asia, The Galaxy Watch Active is another good promise from the South-Korean maker. According to some analysts at Strategy Analytics, the new wearable may help Samsung to surpass Fitbit, especially with the new important feature that is the blood pressure tracking.

Fitbit is stronger in North America, and the recently released Versa was one of the company’s most recent hits.

Previous Galaxy A40 gets support page in Germany, arrival imminent