AnTuTu, a well-known benchmark platform, has presented the updated February ranking of the best performing smartphones. The Xiaomi Mi 9, presented a few days in China and thanks to MWC 2019 also on a global level is at the top of the list.

It was inevitable that the arrival on the markets of the first smartphones equipped with the Mobile Platform Qualcomm Snapdragon 855 shake the rankings of the best performing smartphones, but it was not easy to predict a gap so marked compared to the previous generation.

The average score obtained by Xiaomi Mi 9 exceeds 370,000 points, detaching decisively Lenovo Z5 Pro GT which settles in second place with about 353,000 points. The podium is closed by Nubia Red Magic Mars which is just over 320,000 points. 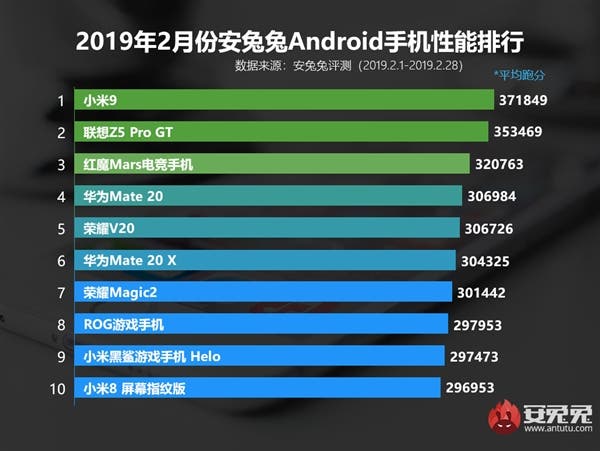 The new Xiaomi Mi 9 score has surpassed Huawei Mate 20, Mate 20X and Honor V20, which last month ruled the charts with approximately 306.00 points, while all other smartphones that use a Mobile Platform Qualcomm Snapdragon845 chasing far away, in some cases below the 300,000 threshold points.

According to what was mentioned yesterday, the Exynos version of the Samsung Galaxy S10 should not worry from the Xiaomi Mi 9, although the 5G variant of the Xiaomi Mi MIX 3 could achieve better results. It remains to be seen what result will be obtained from the Chinese/American variant of the Galaxy S10, which will use the Snapdragon 855 platform.

Next Galaxy S10 pre-orders in Korea fall behind its predecessors