OPPO A5 mid-ranger was launched in China back in July 2018, featuring a 6.2-inch HD+ 19:9 aspect ratio display with a notch and  87.8% screen-to-body ratio, while it gets the Snapdragon 450. The X-esque notch trend has since paved way for the hole punch and the water-dew notch type, and reports reaching us says OPPO might be on the verge of launching a sequel to the device.

As per a report on Mysmartprice, OPPO is now planning to launch an S variant of the OPPO A5, tipped to be called OPPO A5s. The OPPO A5s will retain the 6.2-inch HD+ 19:9 aspect ratio display with 720 x 1520 HD+ resolution, while it will drop the wider and intrusive iPhone X-esque notch style for a more seamless water-drop notch. Under the hood, the A5s will drop the Octa-Core Snapdragon 450 14nm Mobile Platform for MediaTek’s 12nm Helio P35 octa-core processor with four ARM Cortex-A53 cores clocked at 2.3 GHz and an IMG PowerVR GE8320 GPU, while the storage and RAM option will increase from just 4GB/64GB variant to 2GB/3GB/4GB RAM and 32GB or 64GB of expandable onboard storage. 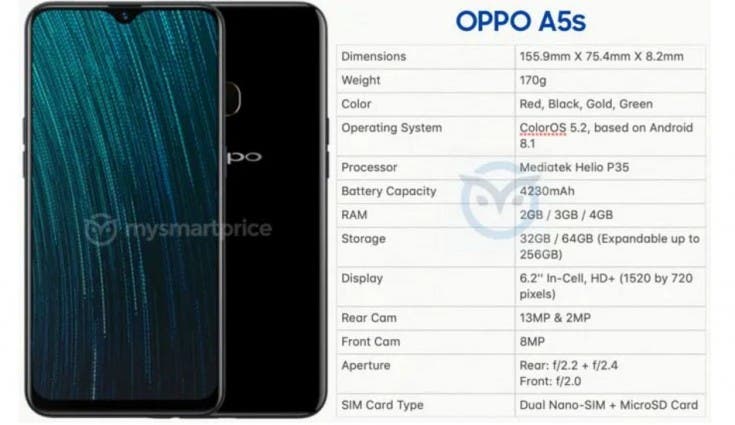 The device packs similar camera configuration in comparison to the OPPO A5 – featuring a 13-megapixel rear camera paired with a secondary 2-megapixel camera for portrait shots and an 8-megapixel front camera with AI beautify features that intelligently recognizes 296 facial features.

The device will debut with same 4030mAh battery, boot Android 8.1 Oreo-based ColorOS 5.2, while it will come in Red, Black, Gold, and Green color options.

Next Samsung will launch a leather cover for the Galaxy Fold