If you have been keeping up with the most recent smartphones,  you would see a sudden emphasis on large resolution cameras being used. Xiaomi recently was accused of falsifying the Redmi Note 7’s camera resolution. As the snapdragon previously did not support 48MP camera. With the recent launch of the note 7 pro in India, they explained how the processor does actually support 48MP cameras. Qualcomm seems to have recently felt pressure from manufacturers to showcase the actual capability of their chips. Qualcomm chips now support up to 192MP cameras according to a recent edit to the specs sheet on their website.

You can see the old and new page of the Snapdragon 845 here as an example. 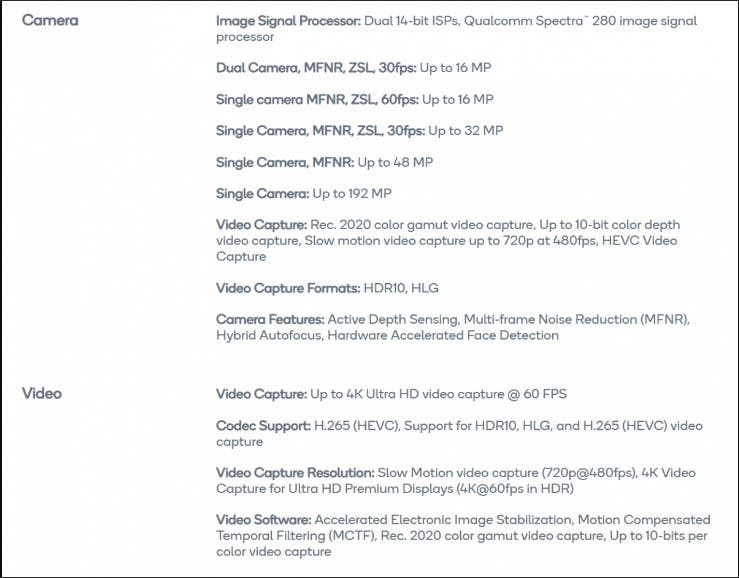 This was first reported by XDA-Developers and provide a detailed explanation as to how this was possible. I will try to simplify the explanation here.

These are the Qualcomm chips that now support 192MP cameras:

There are many options available for manufacturers when choosing a camera sensor and a processor. But they cannot simply pair any camera with any chip. The processor’s ISP (Image Signal Processor) is responsible for many f the camera functions like auto-focus , HDR etc. So the specific camera should function with the ISP.

Qualcomm Chips can actually handle large resolution cameras since their inception but camera resources also have to perform other tasks like Noise reduction and reducing shutter lag. For this specific reason Qualcomm had limited the ISP’s official capability when it came to Camera resolution.

The update web page (example above) now explains that the newer Qualcomm chips now support up to 192MP. This comes at the cost of not having not having features like MFNR (Multi frame noise reduction) and increased shutter lag. If a manufacturer were to use a real 192MP sensor , The chip cannot handle any more cameras. Device would be limited to one camera overall.

If you now browse the Qualcomm site, All updated details and caveats are clearly mentioned. Hopefully this officially reduces burden of explaining customers how their devices support such large sensors.

Next Apple is working on a new "affordable" iPad