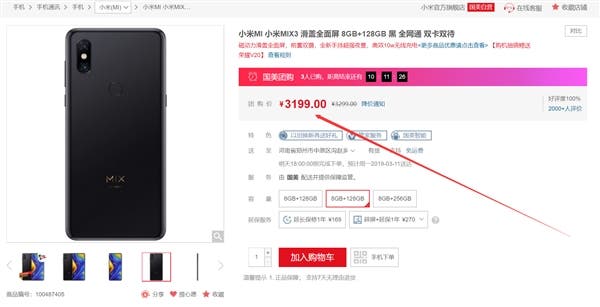 The Xiaomi Mi MIX 3 uses a magnetic power slide 6.39-inch full-screen with an aspect ratio of 19.5:9 and a screen ratio of 93.4%. According to the official introduction, the Mi MIX 3 has a spring-type mechanical structure. Through a set of two “NdFeB permanent magnets” of the same pole, the slide cover is pushed out and closed. Officially this mechanical structure can be pulled up and down up to 300,000 times. However, unofficial tests show that it can go as high as 600,000 times.

In the core configuration, the Xiaomi Mi MIX 3 is powered with Qualcomm Snapdragon 845 processor. It has a 24MP+2MP dual front camera while on the rear, it is equipped with a 12MP+12MP Sony sensors. With its 1.4μm single large pixels, Dual PD speed focus and four-axis optical image stabilization, this smartphone camera was able to score 108 points (image) on DxOMark with a total score of 103. The lights of this smartphone are kept on by a 3200 mAh battery.