In February, Xiaomi released new smartphones such as the Xiaomi Mi 9 and Xiaomi Mi 9 SE, but in terms of notebooks, there is nothing new yet. Moreover, the company hasn’t released a Windows 10 notebook this year, and this is quite odd. But Xiaomi is known for its cost-effective laptops, and logically, it should prepare a new one. Today, we learned a new Xiaomi notebook has appeared on the GeekBench benchmark platform, indicating that the company’s laptop line will be upgraded soon. 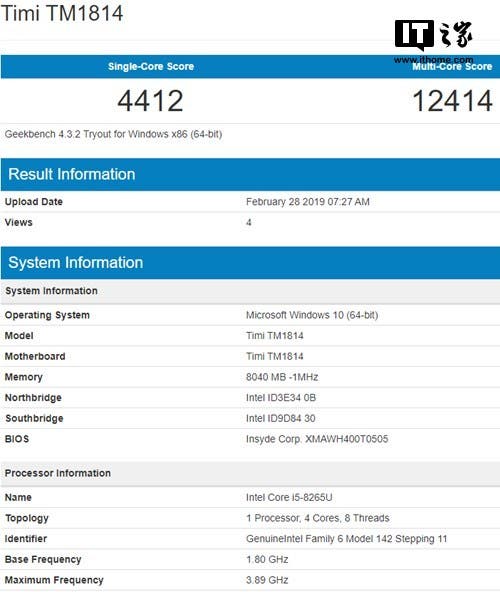 As you can see in the screenshot, the new Xiaomi notebook has a model number of Timi TM1814. It runs on Windows 10 64-bit operating system and is equipped with the Intel Core i5-8265U processor and the 8GB of memory. As for the running points, the single-core result reaches 4412 points, while the multi-core test score is 12,414. Unfortunately, nothing more is known at this moment. So we just can assume what features it will come with.

Last year, Xiaomi launched a few notebooks, strengthening its position in the laptop market. Surely, this company still performs well in the domestic market only. But if everything goes according to the plan, we will see Xiaomi notebooks in other markets as well. Anyways, among the models launched last year, we should stress not only the i5 and i7 variants but also the company’s first i3 model. Apart from this, Xiaomi also upgraded the line of gaming laptops and brought one of the most attractive models to users.

Generally, Xiaomi is offering notebooks for all kind of users. Probably, the only exception is the business line notebooks. In fact, there is none with such characteristics. In this sense, Huawei, which has entered this market just recently, looks more attractive. But we hope Xiaomi will fix this shortcoming this year.

Previous The Android Beta community moves from Google+ to Reddit