In just about a month from now, OPPO will be unveiling a brand new phone under the new OPPO Reno series. The new phone according to OPPO VP will be one of its kind featuring a unique design never seen before in any phone. While all the tips we have had till now are all based on its technical details, a new leak from China may have given us a partial look at what is reportedly a press render of the OPPO Reno.

Although not very revealing, the leaked image confirm — yet again — the device tr-camera system at the rear, devoid of a fingerprint sensor, suggesting we are dealing with a device that will come with the fingerprint sensor embedded under the screen. Rumors are rife that the Reno will be the first phone to get OPPOs 10x zoom tech and the SD 855 SoC. An alleged OPPO Reno phone however recently passed through a certification ”body in Singapore with the SD 710 on boards, so it likely the company might reveal two versions of the device – an SD 855 powered variant likely to be named the Reno Pro and a different variant with the SD 710 SoC. 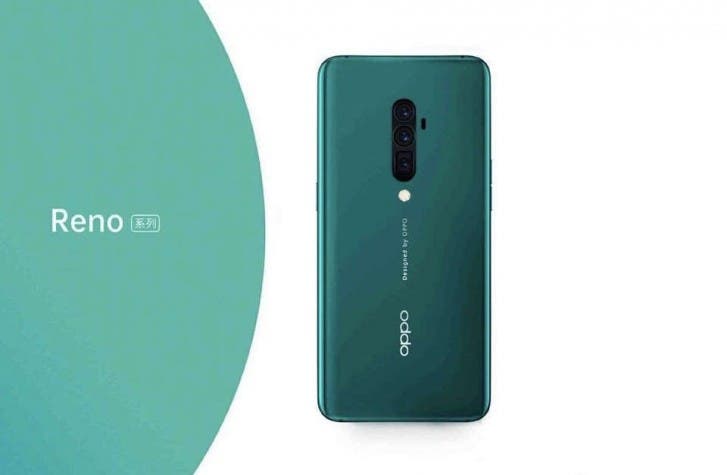 Lastly, the leaked image suggests the Reno phone will come in  Aurora Green similar to the Oppo R17 Pro and the recently announced OPPO F11 pro.

As for specs, previous speculations have pointed at a 16-megapixel front-facing camera, a triple 48-megapixel + 5-megapixel rear camera setup, and a 4065mAh battery with the company’s latest 10X hybrid lossless zoom technology revealed at Mobile World Congress at the end of February.

Read Also:  Canalys: Samsung leader, the fall of Xiaomi and the rise of Realme
Source/VIA :
SLASHLEAKS