The 12GB RAM smartphones are finally here, the new trend started in 2018, and Samsung curiously has chosen to ignore it in the last year. But now, things are different, and with the advent of a Galaxy S10+ variant with 12GB of RAM, the company started the mass production of the LPDDR4X modules that are thought for flagship smartphones with most advanced technology and hardware. The new modules are built with a 10nm-class (1y-nm) manufacturing process and come with a 34.1 GB per second transfer rate.

Another advantage brought by the 12GB LPDDR4X RAM chips is that they’ll be much more power efficient than current models. Samsung will also be reducing the thickness of its modules, that now will measure just 1.1mm saving more space for other components such as big batteries and multiple camera modules in flagships. Furthermore, the use of new LDDR4X RAM modules will benefit users with additional multi-tasking power and faster search responses. The new modules production will start a few weeks after Samsung announced the manufacture o new eUFS 3.0 storage that will go up to 512GB and will be another important technology in the segment for the next few years.

These 12GB RAM modules were developed through a combination of six 16-gigabit LPDDR4X chips into a single unit. In addition of starting the mass production of such modules, Samsung will also increase the supply of these modules alongside 8GB LPDDR4X DRAM modules by 300% during the second half of 2019, since the company expects to receive a strong demand for these chipsets. And that seems pretty accurate, after all with the advent of more advanced RAM modules, manufacturers will start to put 8GB RAM minimum in some advanced flagships.

We can’t say for sure if 12GB RAM smartphones are really necessary at the moment, when 8GB, 6GB and even 4GB of RAM are still enough for handling most tasks in smartphones. However, with the advent of Android Q and its desktop mode, we may see a use for such amount of RAM in the future. After the Samsung Galaxy S10+ variant with 1TB of Storage and 12GB of RAM, Huawei should join soon with a variant of the upcoming P30 Pro, that is expected to have the same RAM capacity. 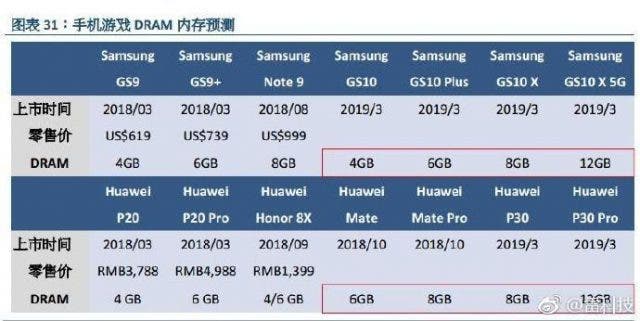 Previous Huawei confirms it will launch the P30 Pro in India

Next Exynos 9610 powered Motorola One Vision spotted on Geekbench