Xiaomi independent sub-brand – the Redmi brand has officially brought its third smartphone – the entry-level Redmi Go to India about a month after it launched the Redmi Note 7 and Redmi Note 7 Pro in the country. With the arrival of the device, the only phone under the independent Redmi brand yet to arrive the country is the budget Redmi 7 launched in China about 24hrs ago.

The Redmi Android Go for the Indian market comes with support for 20+ regional languages, Google Assistant in Hindi, as well as an extra slot for MicroSD so you can fit in a second SIM.

The device is Redmi first Android Go phone, and like most Android Go device, it is based on a watered-down version of Android called Android 8.1 Oreo Go Edition and is sure to receive prompt OS and security updates. The entry-level device is targeted at people from emerging markets with limited internet connectivity and offer pre-installed versions of Google apps like Gmail Go and YouTube Go that are focused on saving space and data. 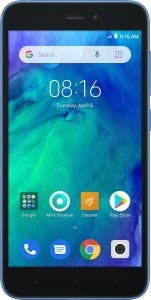 The device aside from featuring the Android Go OS is as basic as it gets, devoid of any extra flair like the fingerprint sensor, face unlock and more seen on some of its Android Go competition, like the Asus ZenFone Live L1and the Alcatel IX.  It flaunts a 5-inch 16:9 HD LCD display with the Snapdragon 425 SoC coupled with 1GB RAM and 8GB storage under the hood.