On March 21, Xiaomi founder and CEO Lei Jun announced important news. As you know, the manufacturer has made Xiaomi Mi 9 Explorer Edition 8+256GB version. And in order to speed up the production progress, this variant comes with the same camera as the standard version. This amazing handset will be available for pre-order at 3699 yuan ($552) this Friday. The first stores it will land in are Xiaomi Mall and Xiaomi Home. It’s also announced the delivery time is set to be around three weeks. 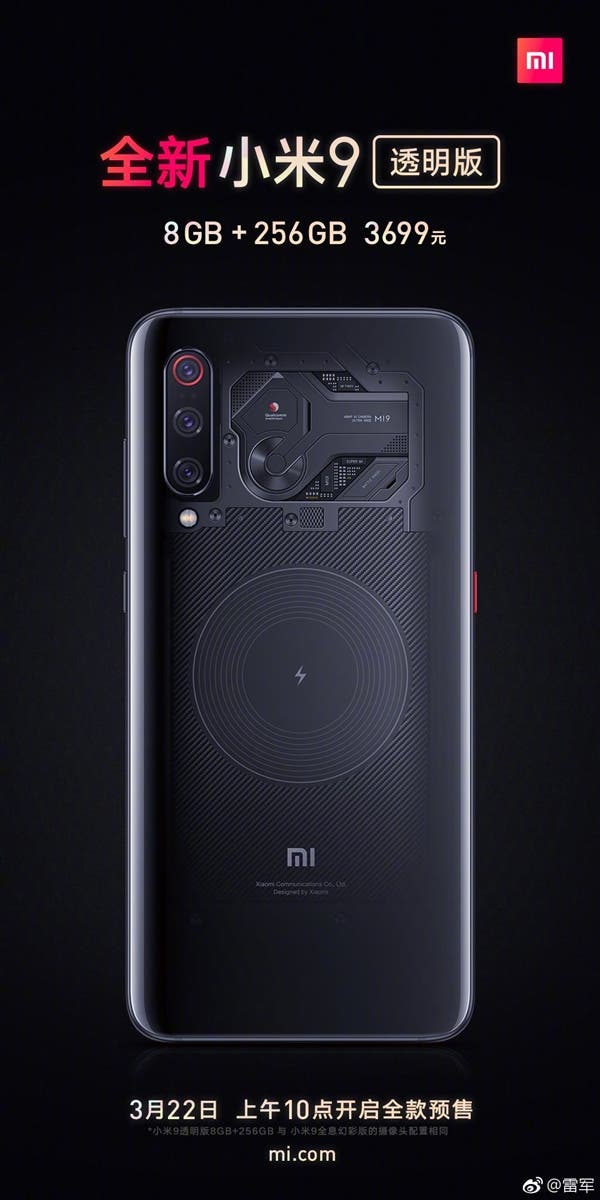 We should point out the key features of the Xiaomi Mi 9 Explorer Edition 8+256GB variant are similar to that of the original Xiaomi Mi 9. This mainly refers to the camera parameters. Thus, the main camera sensor uses a 7P lens and an f/1.75 aperture. But the Xiaomi Mi 9 Explorer 12+256GB variant comes with a 7P lens and an f/1.47 aperture. However, both versions are equipped with a triple-camera, which uses a sensors combination of 48MP wide-angle lens (Sony IMX586) + 16MP telephoto portrait lens + 16MP super wide-angle lens.

DxOMark has already managed this handset and gave a comprehensive score of 107 points, of which the camera part score was 112 points and the video part score was 99 points.

In addition, compared with the standard version, the Xiaomi Mi 9 Explorer Edition has been redesigned. Lei Jun introduced that the entire back glass of the translucent variant is only 0.4 mm, which is thinner than the thickness of four A4 papers.

It’s twice difficult to create an impressive style in such a small space. Also, Xiaomi used a contrasting visual difference between the material and the process on the 0.3mm ultra-thin aluminum plate. In the CNC shape on the 0.3mm aluminum sheet, the available milling cutter is only 0.2-0.3mm, just like the ‘micro-carving creation’ with the embroidery needle. That’s why everything should be done slowly to make a sense of texture and 3D. At the same time, this piece of aluminum has a heat dissipation effect.

Next In China, Smartphones Recycling Rate is Less Than 2%