With all the recent leaks of Huawei P30 and P30 Pro, Huawei could pretty much consider the phones already announced and get it over with. The latest piece comes from a Singaporean website, which lists some of the key features that are present in both smartphones, as well as detailing the launch promo bundles. 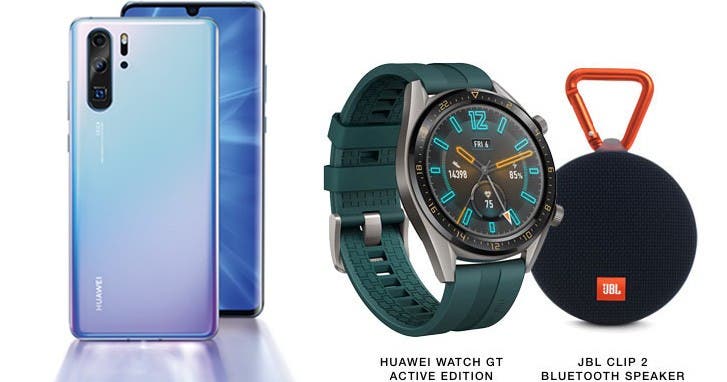 As previously speculated, users that buy the Huawei P30 or P30 Pro on launch day – April 6 – will get a free Huawei Watch GT and JBL Clip 2 Speaker, although this leak mentions the VivoCity mall, some leaks yesterday from Norway and Belgium, confirmed that this pre-order bundle will be available in multiple regions. Europe, however, probably won’t be getting the free speaker in the package.

When it comes to specs, the listing reveals an attractive gradient finish, high-end cameras with impressive low-light capabilities and a brand new feature called Dual-View video. This particular feature will be enabled after the launch through an OTA update, it creates a split-screen video with two of the rear cameras, showing a wide and a zoomed-in view of a scene.

Other specs include a 40MP “SuperSpectrum Sensor”, capable of shooting at super high ISO, also supporting low-light video recording. The Huawei P30 Pro will also feature a periscope camera with 10x hybrid zoom, plus OIS and a ToF sensor. In Singapore, the new P30 duo will be available through Singtel, StarHub, M1, and Lazada.

Next Motorola One Vision with Exynos 9610 and 3,500mAh battery clears FCC