A certain unannounced Motorola Android One phone with model number XT 1970-1 has been making the round for since a few days back. Dubbed the Motorola One Vision, the device already cleared the Wi-Fi Alliance, and the Geekebnch test, while a more recent report suggests it could be the Global variant of the Motorola P40, and has now cleared the FCC suggesting its official launch may not be far off.

As per the FCC, there will be two variants of the One Vision – one with the model number XT1970-1 and another with the XT1970-2 model number, although we are not sure what the differences are. Prominent among the piece of information revealed by the FCC is that the Motorola One Vision will pack a  3,500mAh battery with support for 18W fast charging, while the regulator’s documents also reveal it will support NFC, FM radio as well as the 2.4GHz and 5GHz Wi-Fi networks.

Away from the FCC, we do already know the Motorola One Vision won’t come with the most sought after Qualcomm Snapdragon SoC, instead, the device will be the first major non-Galaxy phone to ship with Samsungs Exynos SoC. Yes, you read that right, Samsung seems to have relaxed its policy of keeping its Exynos SoC to itself and could be selling to interested OEMs going forward. The Motorola One Vision is tipped to come with the Exynos 9610 SoC – the first mid-range chipset manufactured using the 10nm process node technology, and it features four ARM Cortex A73 CPU cores, four Cortex A53 CPU cores, and the Mali-G72 MP3 GPU. 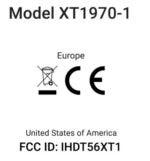 It is expected to come in three RAM and storage variants — 3GB + 32GB, 4GB + 64GB, and 4GB + 128GB, although a previous Geekbench listing suggests the device has a 6GB RAM onboard. Unverified reports say the device is expected to have a 21:9 display with a punch hole selfie-camera and a dual-camera setup on the rear consisting of a 48MP main shooter with “Long Exposure” and “Video 3D HDR.”

For now, there are no concrete shreds of evidence that point to the device details, pricing and as well as the release date.

Next Galaxy Fold shows up with unimpressive performance on Geekbench