The Galaxy Fold and Mate X from Huawei are the first two major phones from renowned brands to feature displays that fold open to nearly double in size, a design trend that will in the coming months gain popularity as more phone makers are expected to embrace the trend, although cost might be the real deal at the initial stage. The Fold won’t be hitting the shelves until later in April, but a hands-on video of the device surfaced a few days back, revealing that the crease where it folds might be very visible, and now, we have the Galaxy Fold stop bt Geekebnch to take its performance test.

The Geekbench site has just tested the Galaxy Fold with the SM-900F which is the international variant of the device, and as you can see from the image below, it uses Qualcomm SD 855 as against other Galaxy phone variants that usually go with Samsy Exynos chipset for the International version, so its more likely we won’t get to see any version of the device that will tick the latest Samsung Exynos 8920 SoC.

Alongside the SD 855, the Fold is seen with 12GB RAM with performance scores that actually didn’t lineup with devices with the SD 855, hat’s not clear is whether this unit is a prototype or the final version that will be pushed to the market, we hope it not the final version, so the actual performance might be different from what is portrayed here. 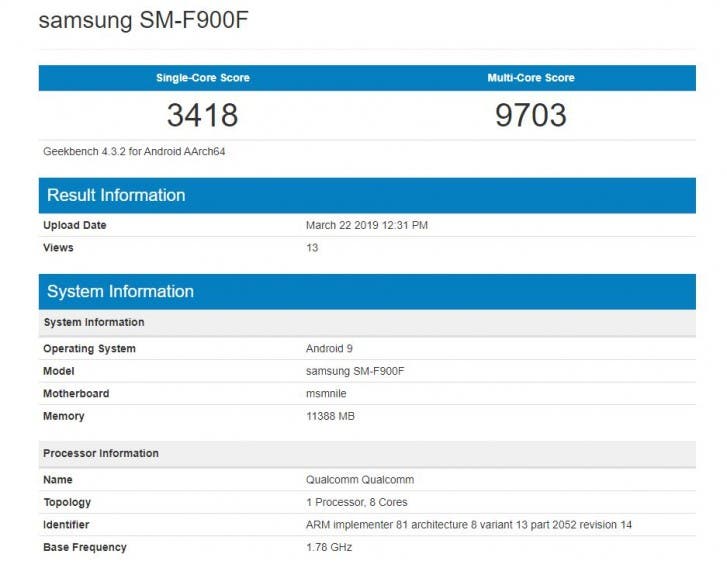 While the idea behind the Galaxy Fold design makes perfect sense, a leaked video that appeared a few days back raises suspicion of how much of folds the device can take in real live use. Though we are not sure the number of folds the unit in the video has taken, but the video vividly reveals the screen may have a very visible crease while being used. While Samsung at the launch said the device can take up to about 200,000 before you can see a visible crease, the video suggests that could be less given that the unit concerned couldn’t have received up to that amount.

Next Xiaomi Mi A3 could feature 32MP front camera, fingerprint-on-display