Less than six months after releasing the Pixel 3 series, Google seems to be moving towards an unprecedented launch of a new pair of own-branded Pixel phones – The Pixel 3a and Pixel 3a XL. According to the rumors, these devices will be a kind of Lite variant of the duo released in last October. Despite the number of rumors, we can’t say when the new devices will be released, but it may be sooner than expected.

Earlier today, Hiroshi Lockheimer, Google’s Senior Vice President of Android, mentioned an unreleased phone on Twitter. More exactly, Lockheimer, said that he has taken some photos with this mysterious handset but “probably shouldn’t share them”. Considering all the recent rumors and the Android boss statement, we have some reasons to believe that this unreleased phone could be one of the devices in the Pixel 3a duo.

The Android Boss used the device while visiting a place of historical importance for today’s tech industry. Since he only took photos with this device, he probably didn’t carry any other handset with him. So this particular handset might be Hiroshi’s current daily driver. This could mean that the device is close to being released, and is being used by some important testers in real-life scenarios.

I got to see Bill Hewlett and Dave Packard's office from the 60s yesterday, it was super cool! But…

I took pictures with an unreleased phone 📱📷🤐 so I probably shouldn't share them here. 😝

The two new devices are very similar with the Pixel 3 and Pixel 3 XL, although the larger model does not have a notch, and this is good, considering the hideous and taller notch used in the Pixel 3 XL. Unlike the Pixel 3 duo which is built from metal and glass, the new devices will be made of polycarbonate plastic in order to keep the manufacturing costs down. Another difference is on the display of the two new handsets, the Pixel 3a will allegedly sport a 5.6-inch screen while the 3a XL will come with a 6-inch panel, both with the same 1080 x 2220 resolution. The original Pixel 3 has a 5.5-inch screen with 1080 x 2160 pixels, while the 3 XL features a larger, higher-res 6.3-inch display with 1440 x 2960 pixels of resolution.

The Pixel 3a duo will not be as powerful as the original devices, which sports last year’s Snapdragon 845 chipset. According to the leaks, the Pixel 3a will feature a Snapdragon 670, while the Pixel 3a XL will feature a slightly superior Snapdragon 710. Processing power aside, the two upper mid-range devices will count with 4GB of RAM and 64GB of Internal Storage, a standard for devices of this class. The camera department will probably be one of the main aspects of the new handsets, that while cheaper, will come with Google’s usual incredible camera capabilities. Rumors points out that Google will equip both handsets with the same 12MP sensors used in the original Pixel 3 devices, and worth noting that this camera is among the best in the smartphone industry. 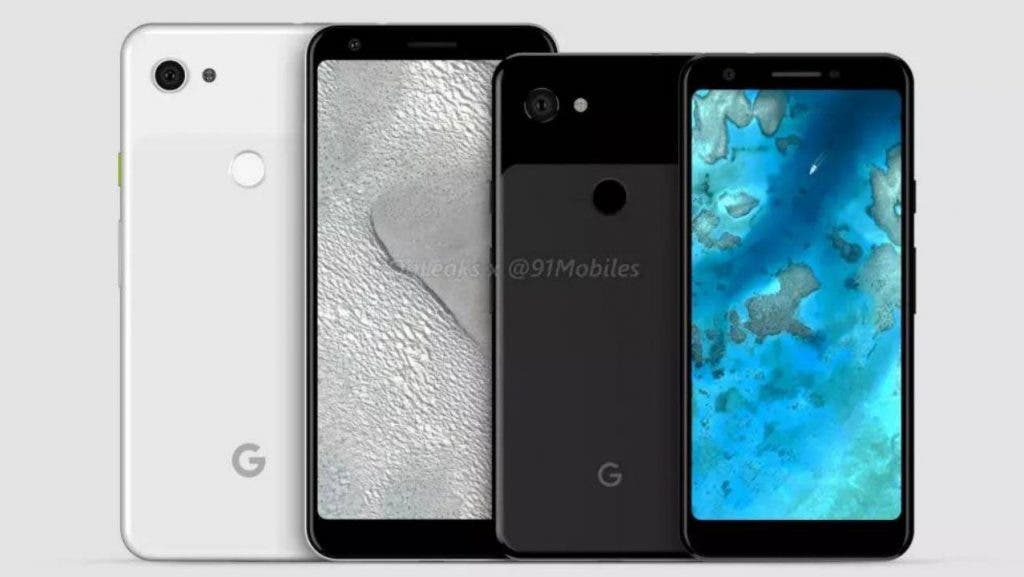 Last, but not least, the new devices will bring back the analog 3.5mm headphone jack, and shouldn’t come with any kind of water and dust resistance. We can’t say when Google will unveil these new devices, but considering the number of leaks we believe that they should be announced during Google’s next big event – Google I/O 2019. This will be held on May 7-9 in Mountain View, California, near Google’s global headquarters.

The new Pixel smartphones are expected to be released both unlocked and via Verizon Wireless. The two new devices will possibly arrive costing about $350 or $400 less than the Pixel 3 and Pixel 3 XL making them a good deal for those who always dreamed with a Google’s own smartphone, but can’t afford their recent flagships.

Next Sony Mobile will reduce its workforce in 50% until 2020