Earlier in January, there were reports that the Lenovo owned Motorola would in the coming months revive its Razr phone brand with an unknown Smartphone that could cost up to a whopping $1500, then it was discovered that the said device could arrive under the guise of a Foldable phone dubbed Motorola Razr to slug it out with the likes of the Galaxy Fold and Huawei Mate X.

Since then there has been no paucity of leaks regarding the foldable Razr phone which has even forced the company to officially confirm its stance on the subject. The company via an interview granted back in February confirmed that it’s working on a foldable phone and that it will be out this summer, but there was no mention if it is indeed a new Razr.

Though no specific time frame has been released for its launch, the device has now passed a major pre-release hurdle, suggesting it could be released soon. An unreleased Motorola phone bearing the Razr XT2000-1 model number has surfaced on the Bluetooth Launch Studio website for the Bluetooth certification, and as various leaks had earlier suggested, the device will indeed bear the Razr moniker. The listing also clearly says the Motorola Razr will be exclusive to Verizon Wireless in the US, though we are not sure if it will sell in other markets outside of the US. 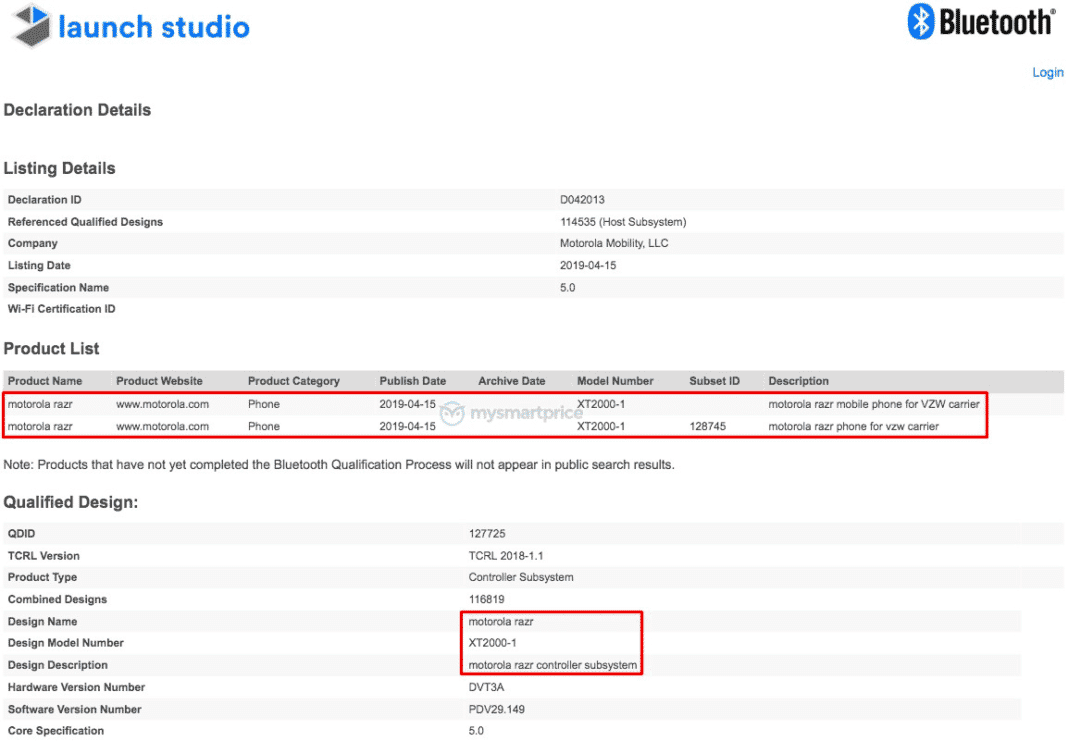 Unlike the Huawei Mate X and the Galaxy Fold with the Kirin 980 SoC and the SD 855 respectively, previous leaks suggest the Motorola Razr foldable phone will get its processing power from Qualcomm’s Snapdragon 710 octa-core processor with an Adreno 616 GPU, while it will come with a vertically folding primary display and a secondary display on the outside, different from Samsungs and Huawei’s design. Here is a video concept render of the Moto Razr.

Previous Ren Zhengfei: Huawei will consider selling its 5G baseband to ANY company