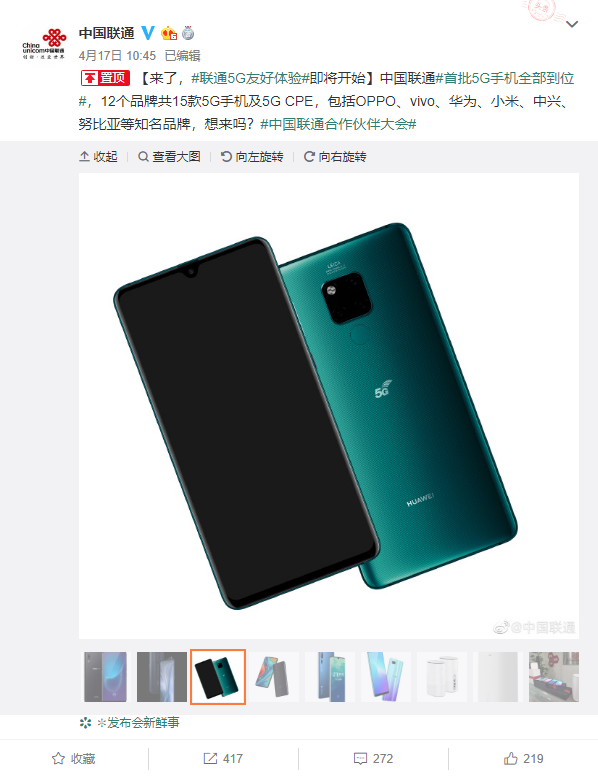 Yesterday, China Unicom’s official Weibo handle said that its first batch of 5G mobile phones is in place, including Huawei Mate 20 X 5G version. Today, the carrier revealed an image of this smartphone which confirms the existence of the device. From the image, the appearance of the Huawei’s Mate 20 X 5G version is not much different from the regular version. The only difference is the 5G Logo which is printed on the back of the phone, reflecting its 5G compatibility.

According to recent information, the 5G version of the Mate 20 X battery will be reduced to 4200 mAh, which is different from the 4G version (5000 mAh). As a makeup, a 40W fast charge will be added. In other words, like the Mate 20 Pro and P30 Pro, it will flush 70% of the power in 30 minutes. In terms of basic parameters, Huawei Mate 20 X has a 7.2-inch giant screen coupled with 8GB of RAM. It comes with a triple Leica rear camera and t is powered by Huawei’s flagship Kirin 980 chip. The Chinese version of the Mate 20 X sells for 4,499 yuan ($673).  Huawei’s first 5G smartphone, Mate X will be available in June. Thus the 5G version of Huawei Mate 20 X should arrive after June. As for the price, we can be sure that it will be more expensive than the 4G version.

Next Samsung issues statement on the Galaxy Fold screen malfunction