OPPO Realme sub-brand since it started operation in May 2018 has steadily climbed up the popularity ladder in India, its adopted home base, and basking on its success in the country has expanded to more countries and is now on the verge of selling its devices in its original homeland -China. The Chinese market is usually an all-important market for any OEMs wishing to leave a mark in the smartphone market.

The firm hasn’t officially confirmed its intention to foray into the Chinese market, but we can already tell that the plan is underway, as it now has an official page/account on Weibo – the Chinese social media site, although it has yet to post anything notable n the page. That should change soon, as there might be plans to bring the latest Realme 3 Pro to the number smartphone market if actually, it is coming to the country.

Aside from India, Realme at the moment has an official presence in Vietnam, Malaysia, Indonesia, Thailand, Egypt, the Philippines, and should be heading to Africa, the Middle East, and Europe before the end of the year.

Thanks to its series of affordable yet capable smartphones, the brand at the inception of this year revealed that it has hit 4million users within its few months of existence, and while that remains an enviable feat, the figure should double in the coming months especially now that it has its eyes on China, Europe, and even Africa. 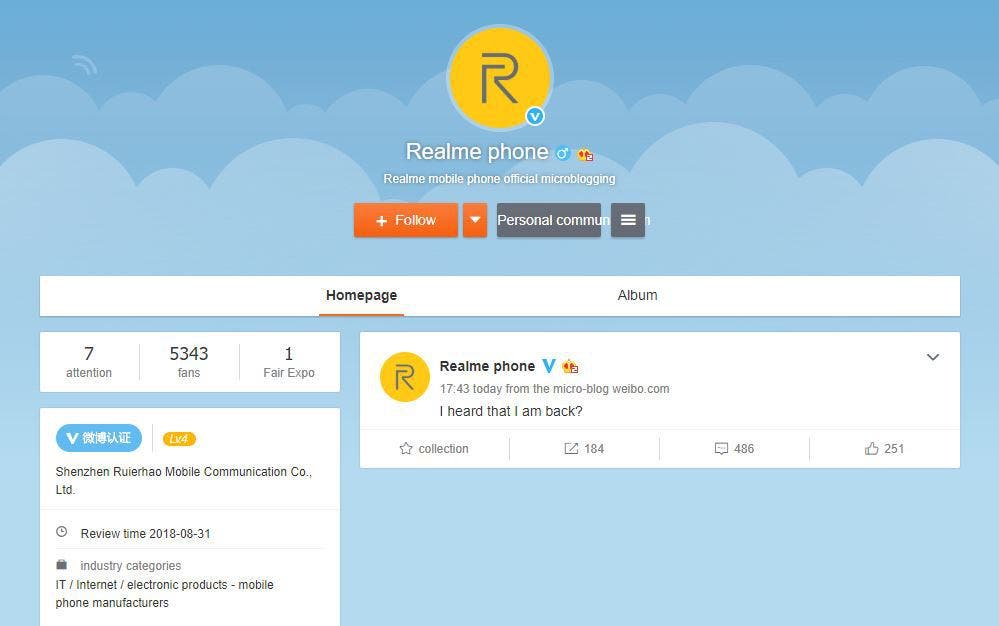 A counterpoint report says the brand was the fourth largest smartphone vendor in the fourth quarter of 2018, holding an 8% market share in the Indian market where Xiaomi and Samsung currently take the lead, although the brand is expected to wax stronger in the coming month as it has just released two capable smartphones to take on the latest Redmi series from Xiaomi.

Next Huawei Mate X 5G version will arrive in July, new 5G smartphone in October too