The official entrance of Realme in China has quickly been followed by strong rumours of a flagship launch in the coming weeks. We’ve also come to know recently that the handset is supposed to be called Realme X. The Realme X, although strongly rumoured to be a flagship-grade device, could end up with two variants – a Snapdragon 855 SoC version and a presumed Lite version with a Snapdragon 730 SoC, according to a tipster who divulged the information on Weibo today.

The Realme X just passed TENAA a couple of days back and its full list of specifications have not been revealed just yet. Also, we’ve seen just one model pass TENAA right now. The tipster says that Realme could have a Pro variant with a Snapdragon 855 to rival the heavily-rumoured Redmi flagship for later this year. This alleged new Realme phone is believed to rock a 48MP primary rear camera, VOOC 3.0,  and a sixth-gen optical fingerprint reader. The tipster also claims this budget Realme flagship will go up against Redmi’s similar offering with the same processor (Snapdragon 730). 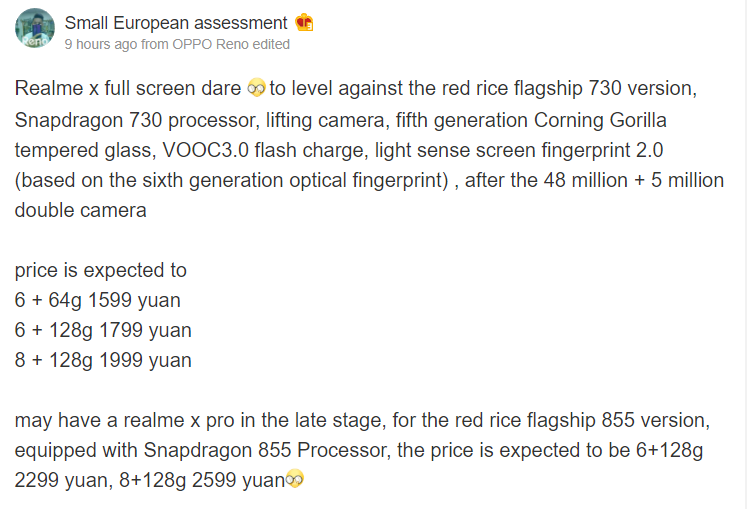 The alleged pricing and variants of the Realme X with Snapdragon 730 SoC is as below.