There is currently a lot of anticipation for the upcoming Redmi Snapdragon 855 phone. As of now, we don’t exactly know when this smartphone will be launched but rumors have it that it will come alive in May. One thing we know for sure is that it will come with an SD855 Soc and the price will be cheap. However, if the price will be cheap, then we shouldn’t be expecting some flagship features on this phone. Today, Lu Weibing, Redmi’s general manager dropped a hint which vaguely suggests that the Redmi flagship smartphone may not use an on-screen fingerprint sensor. 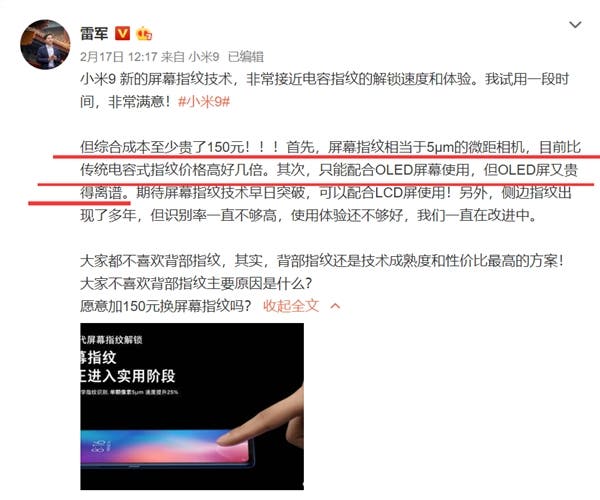 Talking about the on-screen fingerprint sensor on the Xiaomi Mi 9, Lei Jun, CEO of Xiaomi Group said that the comprehensive cost of this feature is at least 150 yuan ($22) which is several times higher than the price of traditional capacitive fingerprints. In addition, on-screen fingerprints can only be used on OLED displays which is also very expensive. If the price of the Redmi Snapdragon 855 will be kept on the low-end, then it has to use an LCD display coupled with a rear fingerprint solution.

Next Google Pixel 3a and Pixel 3a Xl pass bluetooth certification