We are only a couple of days until Oneplus officially unveil the flagship OnePlus 7 and Oneplus 7 Pro. Over the past weeks, we have had quite a lot of leaks about the upcoming devices, with some coming from official and unofficial leaks, though most of the unofficial leaks turn out true.

Just a few hours ago, we learned the Oneplus 7 Pro will be noticeably faster and offer smoother experience than other flagship devices, all thanks to the new ultra-fast UFS 3.0 storage, and now, an official source claims OnePlus will break away from its tradition of providing its devices with  two downward firing speakers which usually is for aesthetic design for true stereo speakers. The official admitted that implementing the stereo speaker on the OnePlus 7 duo was a bit tasking, especially with its full-screen design, but the company crushed all obstacles and has even redesigned the position of the speakers so as to solve the problem associated with audio quality dropping when the phone is used in landscape mode. 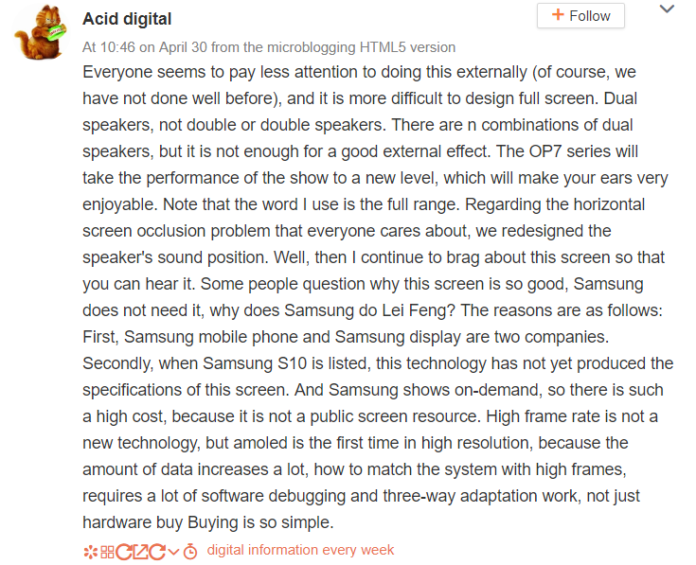 While we still don’t know the exact details, the Oneplus official re-iterated CEO’s earlier claims that say the Oneplus 7 and Oneplus 7 Pro feature a first of its kind display as never seen on any phone till date, not even the latest Galaxy fold and the S10+ can boast of such display. This could confirmation of reports that say the Oneplus 7 Pro will feature a faster, 90Hz refresh rate for the display, which (similar to the ones found on gaming phones like the Razer Phone) would offer a smoother experience for animations.

The device launches on May 14, we hope to get some more useful details about the device in the coming day.