We are only a few hours until the kick off of Google’s  I/O 2019 event where the cheaper Pixel 3 smartphone will be revealed. A lot has leaked about the upcoming Pixel 3a and Pixel 3a XL, and it seems the leaks won’t just stop as we now have a fresh leak that gives us a better look at the cheaper Pixel 3a in a set of new high-res renders with specs sheet that somewhat lines up with what has been leaked previously.

The official source of the specs is the well known Roland Quandt of WinFuture, a figure with proven track records, so we have no doubt these are the real deal. Notably, Google isn’t shying away from stating that the Pixel 3a is made of polycarbonate as opposed to the glass design on the standard Pixel3, with Google providing a warning about the device being scratch resistant, but how “paint may flake off” upon impact. Additionally, materials like leather and denim might stain the Pixel 3a.

Expectedly, the new render confirms the Pixel 3a will come with a design similar to the original Pixel 3, with a two-tone rear housing a fingerprint scanner a lone camera setup, as well as fairly chunky bezels and a hefty chin and forehead above and below the display.

Speaking of the camera, details presented by the leaked spec sheet is pretty similar to the one on the Pixel 3 – including a 12.2MP camera with dual-pixel at 1.4μm width. Autofocus works in conjunction with dual-pixel phase detection, while optical and electronic image stabilization is available. There is an f/1.8 aperture with a 76-degree field of view, though this time there is no spectral + flicker sensor on the rear. There camera above the display is now a lone 8MP fixed focus camera with a width of 1.2μm and f/2 aperture.

It is now clear from the sheet that the Pixel 3a will be fronted by a 5.6-inch 18:9 OLED always on display with 2,220 x 1080  and a pixel density of  441, while it will house the quad-core Qualcomm Snapdragon 670 SoC with Adreno 615 and 4GB of LPDDR4x RAM under its hood. There is also a Titan M security module for hardware-based phone security keys. 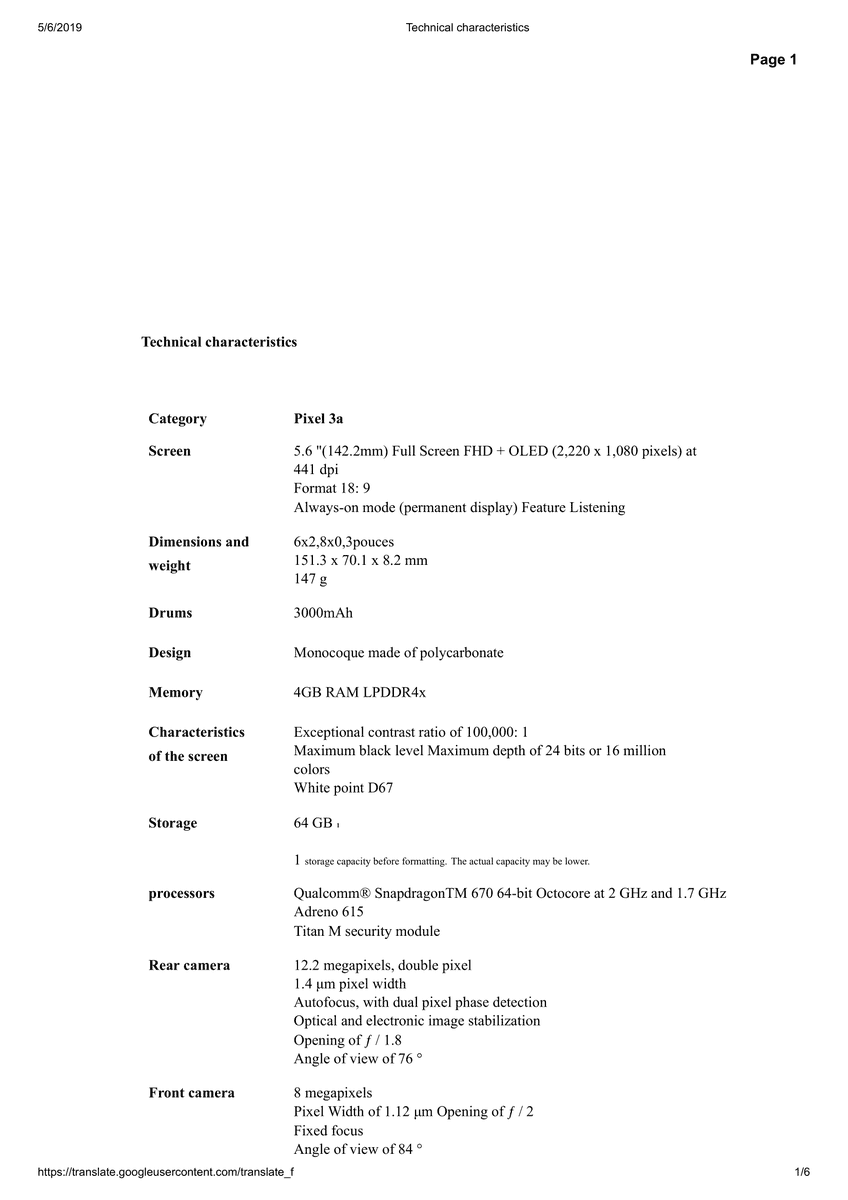 The sheet mentions that Google will squeeze in a 3000mAg battery into the device, although there is no mention of any fast charging support. Expectedly, though not mentioned on the leaked sheet, the Pixel 3a will boot Google’sAndroid 9 out of the box, while it will get a 64GB storage space.

Whether or not this is true, we can not ascertain at the moment, but surely, everything will become obvious in a matter of hours.