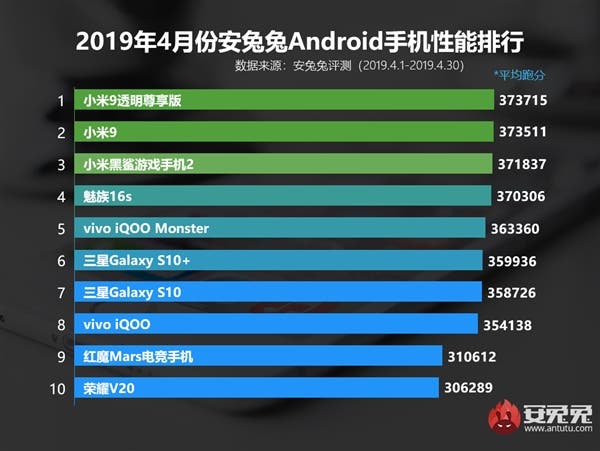 Xiaomi Mi 9 transparent edition and Xiaomi Mi 9 occupies the first two spots with an average score of 373,715 and 373,511 respectively. On the third spot is another Xiaomi smartphone, the Black Shark 2 gaming phone with a 371,837 average score. The fourth and fifth positions are occupied by Meizu 16s and vivo iQOO Monster version with 370,306 and 363,360 average scores respectively. AnTuTu’s April list also has Samsung Galaxy S10+, Samsung Galaxy S10, and vivo iQOO Standard Edition in the sixth, seventh and eight positions with average scores of 359,936, 358,726 and 354,138 respectively. AnTuTu believes that the scores by the latter group (350k group) are much lower than the Snapdragon 855 platform and the values may be more related to endurance rather than performance. Nubia Red Magic Mars is on ninth with a 310,612 average score and the only Huawei phone on the list, Honor V20, is in the tenth position with an average score of 306,289.

There will be a major shakeup of this list this month because a couple of Snapdragon 855 smartphones are expected to be released. We expect the likes of OPPO Reno 10x zoom version, ZTE Axon 10 Pro, Lenovo Z6 Pro, Nubia Red Magic 3 and Redmi Snapdragon 855 flagship smartphone.