Yesterday, OPPO Realme brand officially confirmed it is holding a launch event in China on May 15 for the unveiling of Redmi X killer – the Realme X and RealmeX Youth edition. The company up until now has remained adamant on revealing some specs about the upcoming devices, but that changes now.

The company has officially released the first teaser for its product in China – the Realme X. Via its Weibo page, the Chinese firm released a teaser that once again confirms the RealmeX moniker, while also confirming it will offer up to 91.2 percent Screen-to.body-ratio. The Chinese firm also claims the pop-up camera system on the device has been tested to withstand up to 200,000 pop-ups in its entire lifetime. 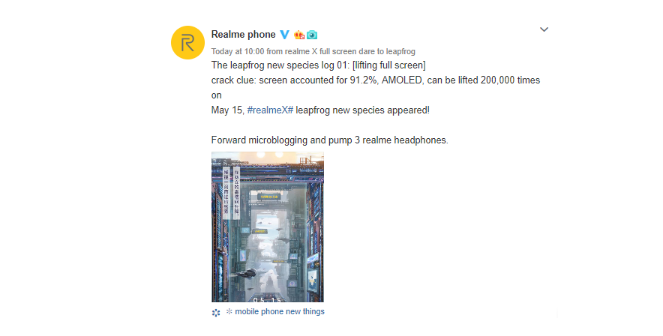 A lot has been peddled about the upcoming Realme X with some rumors suggesting the device alongside the Lite variant could come with a souped-up version dubbed the RealmeX Pro, perhaps based on the SD 855 SoC. You can catch all the leaks here, otherwise, hold-on for official specs from the firm as we hope it might release some more revealing teasers about the RealmeX ahead of its launch event.

Gsmarena has released an alleged retail box of the device, and it looks more like the retail boxes of the Realme U1, Realme 3, and Realme 3 Pro, although there is no any info we could glean from it, other than the Realme X moniker.

Next Xiaomi dazzles in AnTuTu's top smartphone list for April 2019