Full specifications of an upcoming OPPO K1 successor called the OPPO K3 have leaked online today owing to a Chinese tipster on Weibo. The OPPO K1 was launched in October last year and from what information we have right now, the OPPO K3 looks like a solid smartphone to replace the K1 in the coming weeks. 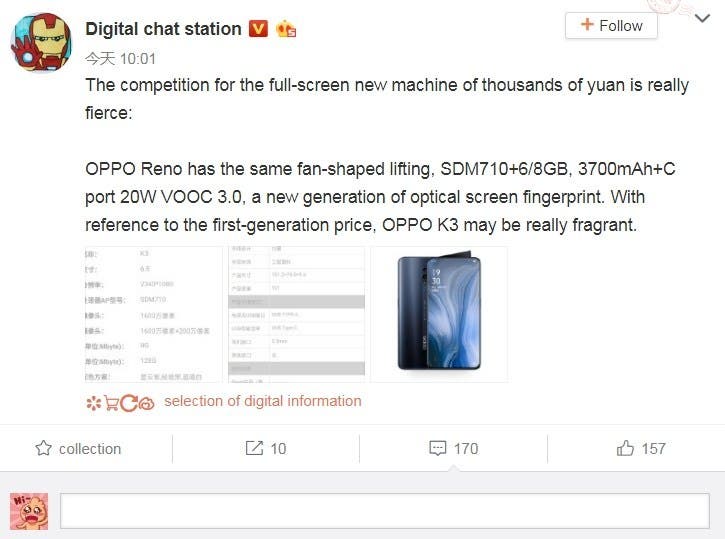 Delving into details, the most important bit of information is that the OPPO K3 is likely to feature a notch-less design while integrating a pop-up camera mechanism that’s in vogue right now in the Chinese smartphone industry. It will also, of course, have an on-screen fingerprint reader. The display is expected to be a 6.5-inch Full-HD+ panel powered by a 3,700mAh battery that boasts VOOC 3.0. The OPPO K3 will definitely check all the right boxes for a good mid-ranger as the tipster has mentioned a Snapdragon 710 SoC to be onboard the upcoming handset.

As for the cameras, the primary lens on the front and rear is a 16MP lens while there’s also an extra 2MP basic depth sensor on the rear. What’s more, the leaked specifications mentioned here correlate to the OPPO PCGM00 / PCGT00 model that recently got TENAA certification. This also reveals that the handset will have a design similar to OPPO’s Reno series. However, the OPPO K1 was priced 2,499 Yuan and it will be interesting to see how OPPO prices this new successor.

Next Got a Xiaomi phone? get set for Xiaomi's Global Photography Contest