The Redmi K20 (known as Redmi Snapdragon 855 flagship) is one of the most anticipated smartphones in the industry but the suspense has dragged too long and netizens are now losing interest. Until today, we had no confirmation for the actual name of this smartphone. However, the company has now confirmed that this flagship will be called Redmi K20. This name looks odd, if not for anything, it came out of the blue. Today, Redmi’s general manager, Lu Weibing gave an explanation for the naming of this smartphone. 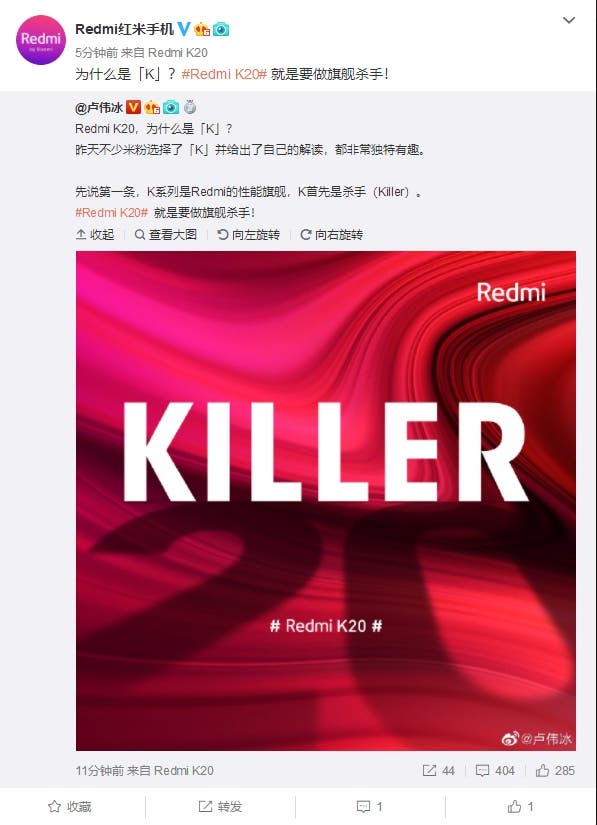 Why is it “K”? Redmi mobile phone official gives the answer: Redmi K20 is to be the flagship killer! Lu Weibing added: The K series is the flagship killer from Redmi, and K stands for “Killer”. However, there was no explanation for the “20”.

The Redmi K20 is expected to come with a 6.39-inch AMOLED full screen. It will be powered with a Qualcomm Snapdragon 855 flagship platform, will use a Sony 48MP ultra-clear camera and its lights will be kept on by a 4000 mAh battery. Lu Weibing also stressed that Redmi is going to declare war on all unreasonable pricing, and Redmi is the king of cost-effective products. In other words, in terms of price, Redmi K20 is expected to be the cheapest Snapdragon 855 smartphone. This device will also use a pop-up camera and an on-screen fingerprint sensor.