Recently, Strategy Analytics released its latest research report, called ’Will Huawei Survive Under the US Ban?’ It is expected that without the authorization of Google Mobile Services, Huawei’s smartphone business in overseas markets will face huge risks and uncertainties in 2019 and 2020, especially in the Western European market. 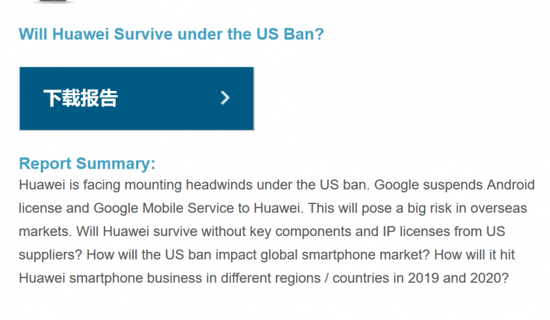 The report pointed out that assuming the ban continues, they expect Huawei’s global smartphone shipments to decline by 24% year-on-year in 2019. By 2020, shipments will continue to decline by 23% year-on-year. The report justifies this estimation by saying the Trump administration’s actions make it difficult for the Chinese tech giant to utilize US hardware and software, especially Google Play. However, this does not have much impact on the Chinese market.

According to the report, in the high-end market segment, Samsung and Apple will benefit from Huawei’s exit in the short term (using the P-series, Mate series and Honor-branded high-end models with the HiSilicon 7nm chipset). In the in overseas markets, Samsung and the top Chinese manufacturers (Xiaomi, OPPO, and VIVO) will benefit from Huawei’s difficulties as its handsets will lack Google services, and the software substitutes will need time to stabilize in performance.

Before Huawei was added to the US Commerce Department’s Entity List, the company shipped 59.1 million smartphones worldwide in the first quarter of 2019, up by 59.1% year-on-year. This simply meant Huawei held 17.9% in global market share, overtaking Apple and trailing behind only Samsung. Generally, in 2018, Huawei shipped 205.8 million smartphones globally, following Samsung and Apple. This was a clear indicator that it is gaining momentum and may outrun the two leaders.

Shui Qian, an analyst with Strategy Analytics, said they believe Huawei will rise despite mounting headwinds. She added that the US ban will force Huawei to speed up research and development to shake off its reliance on US suppliers. Honestly, we think so as well.

Previous [Update]: Honor 20 Pro sale interrupted due to US ban

Next TSMC will continue manufacturing chips for Huawei; Kirin 985 should be unaffected by the ban