On May 21st, OnePlus 7 Pro officially commenced its first sales. According to official data, OnePlus 7 Pro net sales exceeded 1 billion yuan (∼$145 million) in 1 minute and won the Jingdong full platform single product sales champion. However, this smartphone also suffered from insufficient production capacity and insufficient stocking. This is the first time that a major brand will be suffering from insufficient stocking after Xiaomi Mi 9 failed to meet up with the demand earlier this year.  Liu Zuohu, OnePlus CEO, said that he had urgently transferred the mobile phones sent overseas to the domestic market. 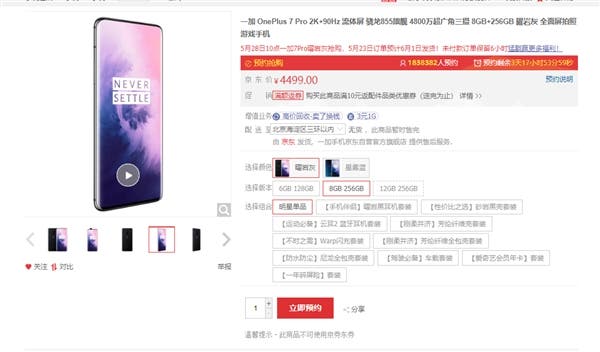 Also, all orders made on the May 23rd sale will not be shipped until June 1st. In this regard, Liu Zuohu said on Weibo that efforts are being made to adjust production plans, redistribute the supply of various regions, and meet the needs of Chinese users at the fastest speed. “I understand the mood of everyone very much. I have had such experience before…” Liu Zuohu said.

Next Redmi K20 to use a Qualcomm Snapdragon 700 series SoC