The Samsung team wastes no time and following Huawei’s recent events and the US government’s ban, it decided to launch an initiative on its store in Singapore dedicated to users of the Chinese manufacturer.

Who owns one of the Huawei smartphones and fears that the ban of the company in the United States and Google’s decision to suspend the collaboration with it can make their lives more complicated in the future, now has one more chance to switch to a Samsung Galaxy S10.

The Korean giant, in fact, has included some Huawei devices with generous compensations for an exchange program:

This offer is valid for users who decide to buy a Samsung Galaxy S10 and includes numerous other devices from previous generations of the Korean brand or other manufacturers. 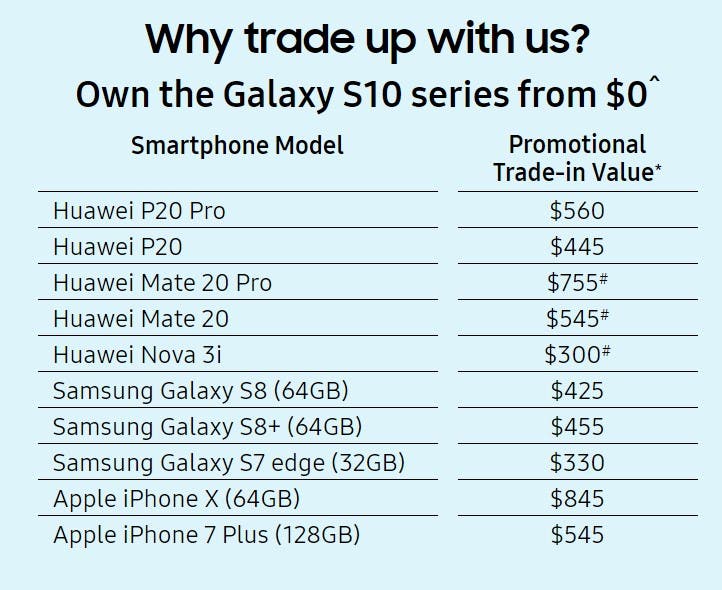 It is worth to mention that since the US government classified Huawei a threat to national security ordering all sort of companies to stop deals with the Chinese firm, the smartphone and 5G network provider started to see all sort of troubles. It lost its Android OS, lost the hopes for future Kirin chipsets, and was recently kicked out of Wi-Fi Alliance. Now, because of this, a product comparison website called PriceSpy has reportedly informed significantly lower click rates in the past four days searching for Huawei smartphones receiving almost half as many clicks as they did last week in the uk and 26% less on the global stage.

Previous Is OnePlus 7 Pro really waterproof? Yes, and this teardown video proves it