At a sensitive moment when Sino-US relations are strained and Huawei is under pressure from the United States, Semiconductor Manufacturing International Corporation (SMIC), China’s largest and most advanced wafer foundry, has suddenly announced its delisting from the New York Stock Exchange (NYSE). In theory, SMIC is no longer subject to US restrictions. At these fragile time, things like this are quickly seen as an important signal. 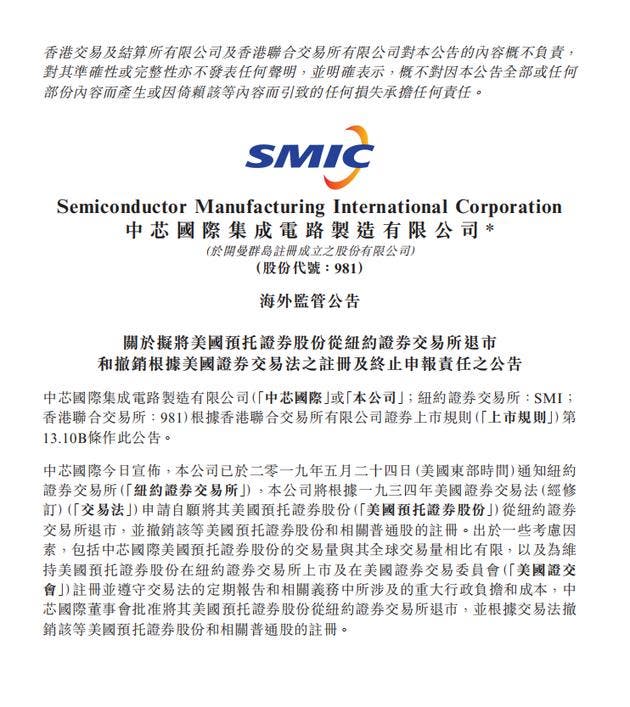 Why did SMIC withdraw from the NYSE? According to official sources, “For some considerations, the volume of trading of SMIC’s American Depositary Receipts is limited compared to its global trading volume…The SMIC Board of Directors approves the delisting of its American Depositary Shares from the New York Stock Exchange and withdraws its registration and related common stocks.”

This issue still sparks speculation, especially when the delisting timing coincides with the current Sino-US dispute and Huawei sanctions. China is strengthening its own technology. It appears that the foundry is perceiving that it will fall into the same predicament as Huawei thus it is withdrawing its dependence on the US.

However, SMIC has once again denied such rumors. In an interview, the company denied any relationship between its delisting and Sino-US relations or Huawei. The wafer foundry said that it’s delisting has been considered for a long time and it took the action because of its ADS (American Depositary Shares) “limited trading volume and high cost.” SMIC has a very limited trading volume on the NYSE, and it still needs to maintain a heavy administrative burden and higher costs. The transaction volume is small, the maintenance cost is high, and the economy is not cost-effective. These are what the company cited for its delisting. However, SMIC is still listed in Hong Kong, and most of the transactions are open to the public in Hong Kong.