Besides rumors that Lenovo owned Motorola could be reviving iconic Razr phone brand as a foldable smartphone, the firm is also reportedly working on a number of Motorola branded phones; including the rumored Motorola One Pro, Motorola One Vision and the Quad camera phone which we saw in a render back in April.

While there is presently no date set in stone for the launch of the supposed Motorola foldable phone, indication has emerged that the brand does have plans to introduce more of its iconic brand for which it was famous in the past. A new trademark listing first sighted by 91mobile suggests so.  The brand via its Trademark Holdings earlier this month(May 8th) filed a trademark for the “ROKR” under class “09”,  which is the category for “mobile phones, smartphones, and accessories”. This is a clear indication that the brand is preparing a new Motorola ROKR phone, and while the listing doesn’t reveal anything significant about the smartphone’s specifications or design,  there is the likelihood the device might be the Quad-camera Motorola phone we sighted earlier in leaked renders.

It rather too early to speculate at this point, given that the Chicago based company has yet to issue any concrete official statement regarding the rumored Motorola Razr foldable smartphone. 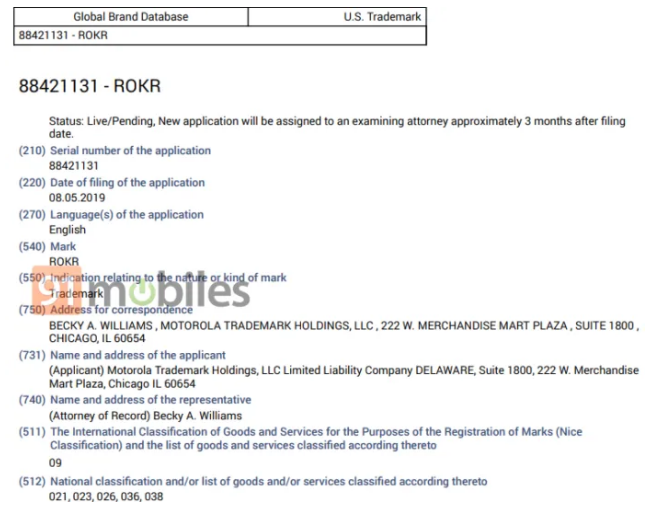 Just so you know,  the first Motorola Rokr launched in collab with Apple iTue with a colour display for viewing album art, dual built-in stereo speakers and stereo headphones that also serve as a mobile headset with microphone.