After some speculation, MediaTek has finally revealed to the world its first 5G capable chipset – The Helio M70.  The new chipset not only comes ready for the newest network but also was designed with the 7nm process ensuring a lot of performance at lower power consumption. Furthermore, it’s the first platform to include ARM’s Cortex-A77 CPU and Mali-G77 GPU. The announcement was made during this year’s Computex in Taiwan.

The 5G Modem is integrated with the Chipset, that means that all smartphones equipped with this chipset will be able to navigate through 5G standalone and non-standalone sub-6GHz networks. Obviously, it also offers support for 2G, 3G, and 4G LTE networks. According to Joe Chen, MediaTek’s President, we are seeing the most powerful 5G SoC announced to date. 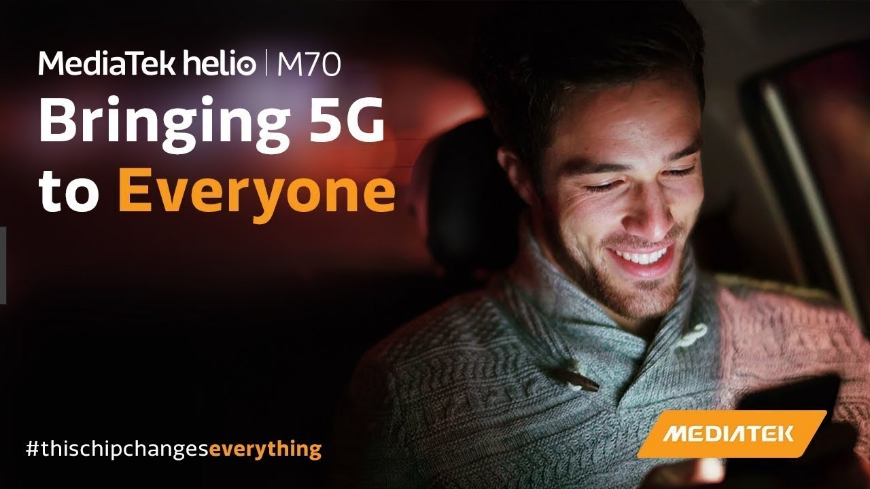 The chipset shipments should start during Q3 2019, that means that the first smartphones with it are expected for early 2020. The announcement didn’t include all the specifications of Helio M70. Apparently, the Taiwanese chipset maker will issue a separate complete sheet “in the coming months.” Companies that usually still have a strong partnership with MediaTek are Vivo and Oppo, so we expect to see both BBK Group subsidiaries releasing at least one 5G handset with Helio M70 at the beginning of 2020.

The press release stated that the Helio M70 will reach a peak throughput of 4.7 Gbps download speeds (on the sub-6GHz) and support New Radio (NR) 2 Component Carrier (CC). The chipset will also offer 4K video encoding support and decoding at 60FPS. It also has dynamic bandwidth switching technology that allocates 5G bandwidth required for specific applications to improve modem power efficiency by 50 percent and extend battery life.  There’s a newer AI architecture that thanks to a newer AI processing unit offer support to more advanced AI applications, including for imaging like de-blur so users get great shots even when subjects are moving fast. Last but not least, the chipset comes ready for the high-resolution camera era, offering support for up to 80MP resolution.

Next Huawei To Announce A New Chip Tomorrow On May 30