A few weeks after it was first leaked by tipster Evan Blass, the Motorola One smartphone dubbed the Motorola One Action has now surfaced on the Geekbench benchmark website. The listing reveals that the Android One phone is powered by the same SoC on the One Vision – the Samsung Exynos 9609 processor, and that too will be mated with same RAM size on the One Vision – 4GB of RAM, though there is the likely hood there may be other variants with more or less RAM size.

The device will boot Android 9.0 Pie operating system right out of the box, and on the performance level, the One Action performed as well as the One Vision did – returning  a single-core score of 1,601 and a multi-core score of 5,377.

From the foregoing, there are indications the Motorola One Action will come with hardware similar to the One Vision. And as suggested by the One Action moniker, there are speculations the device could launch as Motorola first ruggrf phone, likely featuring MIL-STD-810G certification and an IP68 rating. 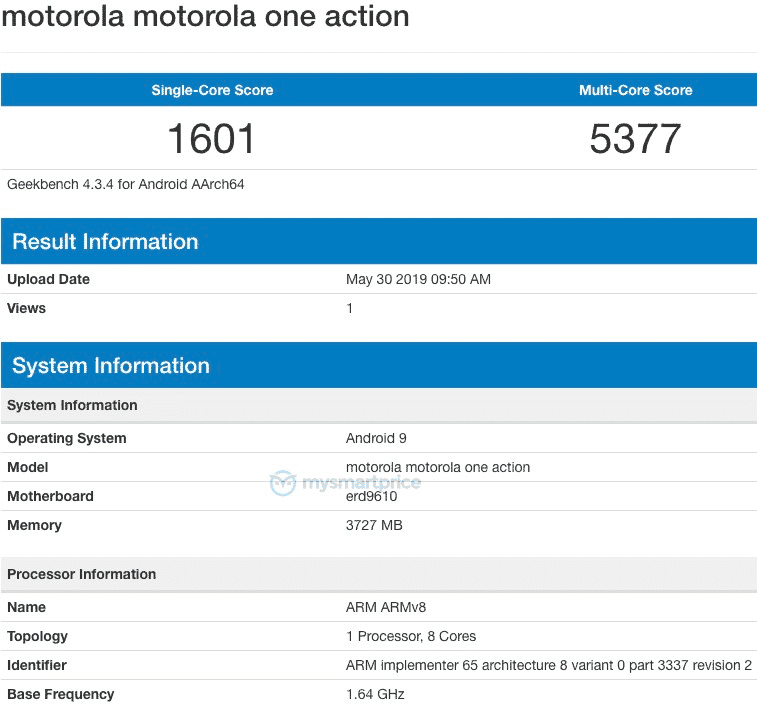 There’s currently no information on other specs and features, as well as the release date. One thing is for sure, though – the release date is getting closer given its appearance on the Geekbench site. The device could be making a stop over by theFCC and perhaps the Bluetooth SIG in the coming days.

Previous Google Pixel 4 will have a nice big hole in the display: here's how it should be

Next Lenovo Brand Carnival coming, get Z6 Pro for free and much more