With the Nova 5 and Nova 5i having a not definite release date yet, Chinese smartphone maker Huawei has a new smartphone launch event scheduled for June 5 in Chengdu, China. The company revealed that the event will be the launch pad for the unveiling of the Huawei Maimang 8 which is the successor to last year’s  Huawei Maimang 7.

The launch of the Huawei Maimang 8 is rather coming too earlier, given that the Mate 30 series has yet to debut, and if you recall, Huawei announced the Mate 20 Lite as the global variant of the China-exclusive Huawei Maimang 7.

As per the event poster/teaser, the Huawei Maimang 8 will come with a water-drop display, a triple camera, as well as a fingerprint scanner on the flip side. The rear is similar to the P20 Pro, though with a fingerprint scanner. It is expected to come flaunting a 6.21-inch display with a waterdrop notch, while it will pack an unknown processor under the hood, though Huawei makes it clear the device will get the company’s GPU Turbo technology which is known for speeding up the gaming. It will unsurprisingly boot Android 9 Pie with the EMUI 9 UI  out of the box. 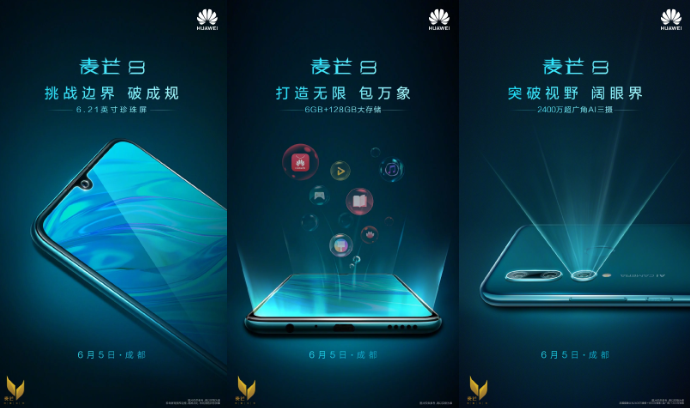 Per the official poster, the Huawei Maimang 8 will come in 6GB of memory + 128GB of storage model with a triple camera setup comprising of a  24 MP + 16 MP sensors, as well as a 2 MP AI camera sensor. Speaking of the internal hardware, the Maimang 8 could come with the same Kirin 710 found in the Maigmang 7. You can check out the Maimang 7 full specs here.

Do check back for more official teaser ahead of the June 5th date.

Next Honor 20 Pro will get a version with 12GB RAM, TENAA listing reveals