Today, AnTuTu released the ranking of Android mobile phones based on their performance for the month of May. It must be noted that the scores on the AnTuTu Android phone list presents average scores and does not represent the highest or lowest running scores. Furthermore, the scores come from devices that were tested between May 1st and May 31st, 2019. 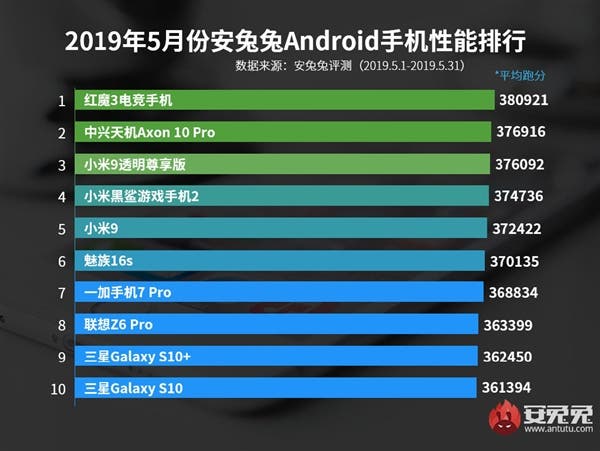 We can clearly see that Chinese manufacturers are dominating the AnTuTu performance list. For the month f May, Nubia Red Magic 3 e-sport mobile phone came top with an average score of 380,921 while ZTE Axon 10 Pro and Xiaomi Mi 9 Explorer Edition came second and third with average scores of 376,916 and 376,092 respectively.

On the AnTuTu Android phone list, Xiaomi still claims fourth and fifth positions with Xiaomi Black Shark gaming mobile phone 2 and Xiaomi Mi 9 scoring 374,736 and 372,422 points. The sixth to eight positions are occupied by Meizu 16s, OnePlus 7 Pro and Lenovo Z6 Pro which score 370,135, 368,834 and 363.399 respectively. South Korean manufacturing giant, Samsung, had to make do with ninth and tenth positions with the Samsung Galaxy S10+ and the Samsung Galaxy S10 scoring 362,450 and 36,1394 points respectively. Well, Huawei and its sub-brand Honor did not make the list for May. Perhaps the Honor 20 will make the June list.