The Lenovo Z6  Lenovo Z6 Lite (a.k.a Lenovo Z6 Youth) recently launched in China, and while the company hasn’t divulged plans of launching the device outside of China, it would seem the device will be launching in other countries soon, not as the Lenovo Z6, Lite though. We say so because a new Lenovo phone dubbed the Lenovo K10 Note has just been certified by the NBTC in Thailand and IMDA in Singapore hinting at its imminent launch. Interestingly, the Lenovo phoneThe device bears the model number L38111, which interestingly is the same model number associated with the already announced Lenovo K6 Lite.

Essentially, the Lenovo Z6 Lite will be re-branded for other countries including Thailand, and Singapore as the Lenovo K10 Note. The  NBTC and IMDA documents, unfortunately, haven’t revealed any other details about the Lenovo K10 Note, but given it shares the same model number with the Z6 Lite, we expect both devices to bear the same design as well as specifications. 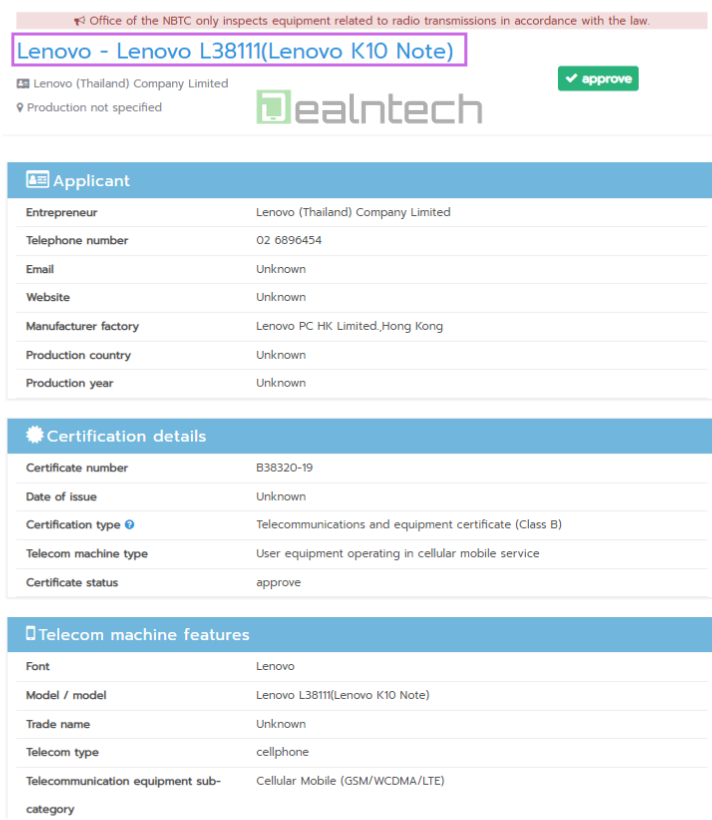 The device, if it eventually arrives as a rebadged Z6 lite is expected to be made out of the same roll cage magnesium alloy which is the same material we see on Lenovo’s ThinkPad notebooks and will be coated in Knight Black and Stardust, though there are chances Lenovo could jack up the color options.

It gets a waterdrop-style notch display with glass design on the front and back with a gradient finish on the rear and a triple rear camera setup which consists of a 16MP sensor; combined with an 8MP sensor and a tertiary 5MP sensor, while it uses a rear-mounted fingerprint scanner and face unlock technology for biometric unlocking.