Amazon is now the world’s most valuable brand, leaving Apple and Google behind, and ending the 12-year run of technology brands atop BrandZ’s list. Back in 2018, the giant was the third most valuable brand, behind the two giants of Silicon’s Valley, thanks to a whopping 52% year-on-year increase the company now sits at the top of the world.

According to the list, Amazon is now valued at $315 billion, while both Google and Apple are at the 309$ billion territories. In the fourth position, we have the giant company founded by Bill Gates and Paul Allen, Microsoft with its $251B value. Fifth, we have a VISA with $177B and Facebook with a $158B value. 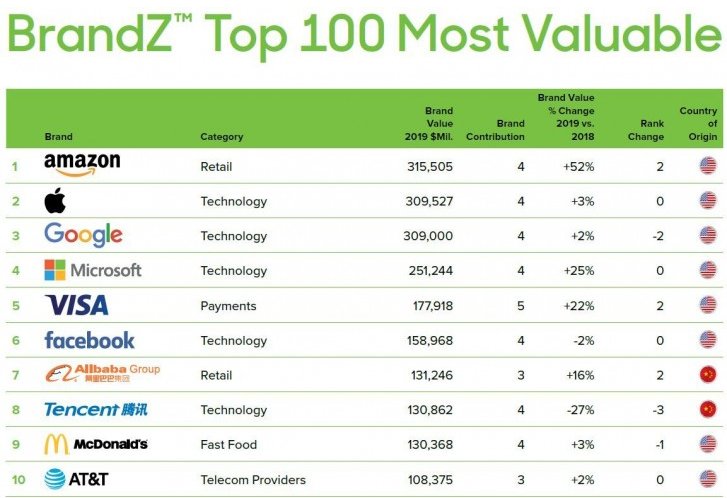 Worth noting that this ranking differentiates between the most valuable brand and largest company by market cap. When it comes to the latter option, Microsoft is currently the biggest company, at around $1,016B, followed by Amazon’s $916B, Apple’s $751B and Google’s Alphabet at $750B. Back to the most valuable brands, it’s important to mention 8 out of the 10 companies are American companies. Besides the already mentioned companies, we have McDonald’s, AT&T on the list.

On the other side of the coin, we have the Chinese Alibaba Group with a $131B value and Tencent hitting the $130B mark. Out of all listed brands, only Facebook and Tencent have seen a year-over-year decrease in brand value – -27% for the Chinese company and -2% for Mark Zuckerberg’s social media company.

Amazon walked a long way to become the world’s most valuable company. The company not only represents a giant retailer, but also has a ton of other important segments such as video streaming, technology, and AI. Being one of the most innovative companies in the current scene. Let’s see how Apple will act to recover its throne.

Previous iPhone XR 2 to sport a 3,110mAh battery; 5% larger than its predecessor

Next Asus ROG Phone 2 will boast a 120Hz display