Asus has recently announced a partnership with the Chinese Tencent Games to develop its upcoming Asus ROG Phone 2. Now the Taiwanese manufacturer has disclosed a key spec of its upcoming gaming smartphone – a 120Hz display.

The company disclosed the news in Weibo thanks to a partnership with Chinese fighting game “Under the One Man.” According to Asus, its upcoming smartphone will feature an increased refresh rate and also promised that future games will be further optimized for the 120Hz standard. 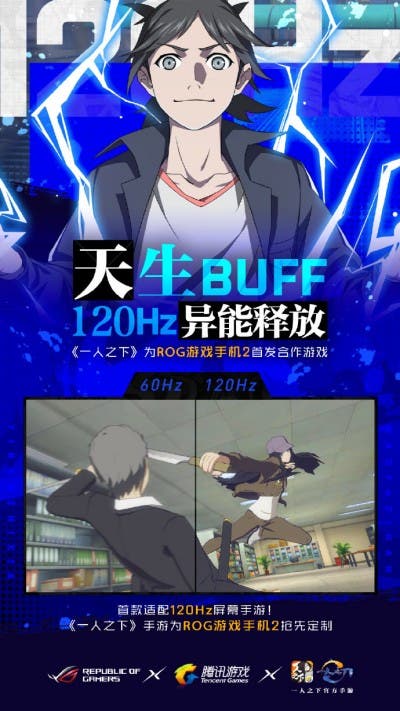 With its 120Hz display, the upcoming ROG Phone 2 will be the third device to ship with the whooping refresh rate. The other two were the Razer Phone and Razer Phone unveiled in 2017 and 2018 respectively. Thanks to Tencent Games, Asus’s next gaming smartphone will ship with exclusive gaming software optimization from the Chinese company. This will allow users to experience a more immersive and smooth experience with the high-end Android games. Fortnite and Tencent’s PUBG should run perfectly on Asus’ upcoming beast.

Other rumors point out that ROG Phone 2 will ship with the Snapdragon 855 paired with 12GB of RAM. It may also ship with a refined cooling mechanism, furthermore, it should bring back the notorious design with its sharp lines and LED accents colors. Of course, just like its predecessor, the next ROG phone should include a plethora of accessories to improve the gaming experience like a ROG exclusive gamepad.

For now, all we know is that the Asus ROG Phone 2 will be released in July, but no word on pricing and availability has been given by Asus. For now, we have to wait for more clues in the build-up of the release date.

Previous Amazon becomes the world's most valuable company; Apple is now the second