Let’s go back to talk about the LG V50 ThinQ 5G, the first smartphone with support for the 5G networks of the South Korean company. Officially presented at the Mobile World Congress 2019, it now shows itself in many new official images that indicate everything there is to know about it and, above all, how to use the Dual Screen.

The first is an image that shows the purely technical aspect of the LG V50 ThinQ, with the entire technical data sheet printed on the image and a space dedicated to the Dual Screen, the major innovation that the device brings. 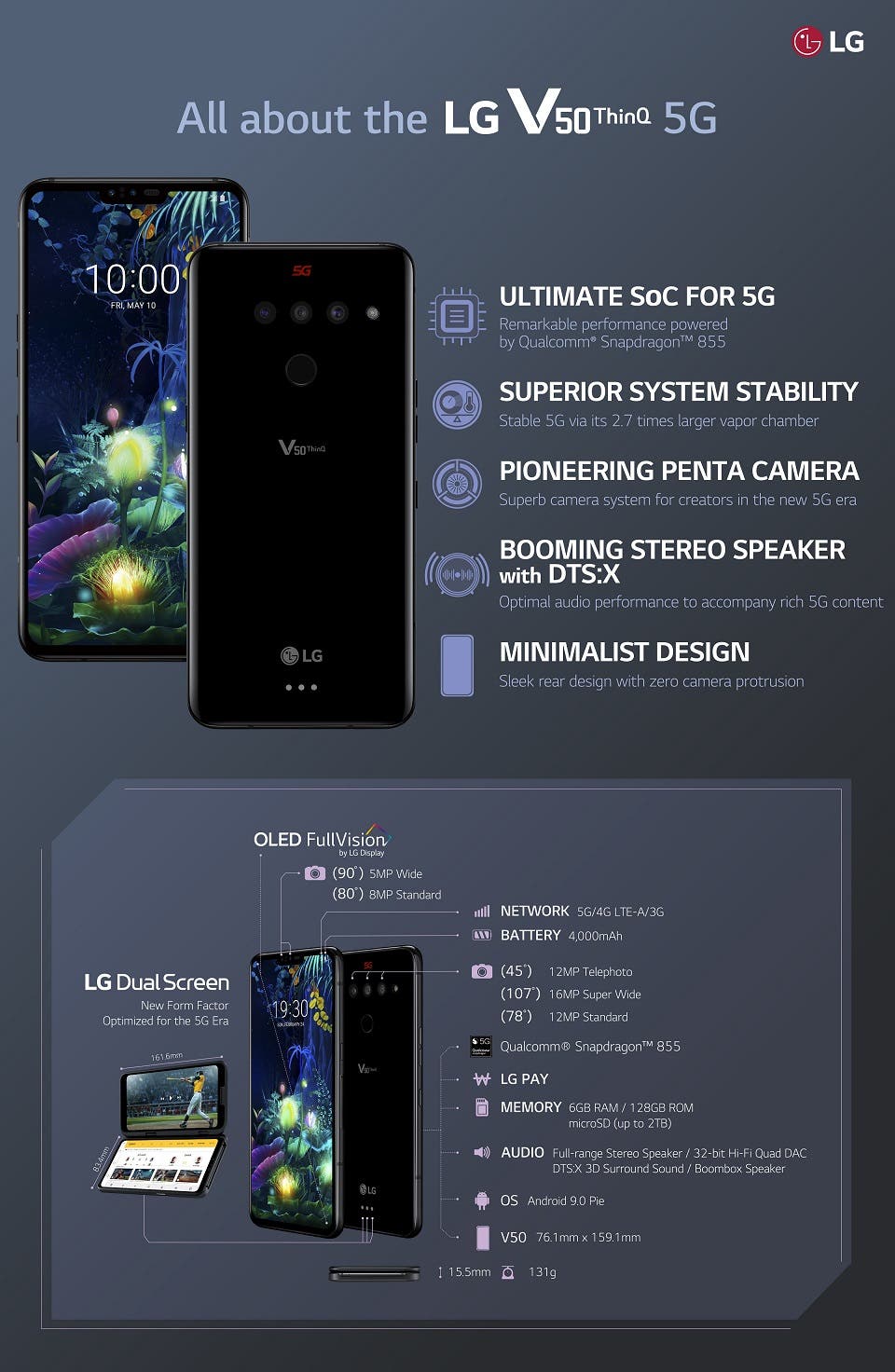 All these images that you can see below, precisely 10, focus on the possible ways of using the Dual Screen. As we know, the second screen of the LG V50 ThinQ is installed in a flip cover that can be connected to the smartphone at the user’s discretion.

The first image introduces the Dual Screen and tells us that it can be used in about 20 different ways. The second shows how to mount the flip cover on the smartphone, highlighting the simplicity of the operation.

Let’s now move on to the third image, the first true illustration of a mode of use: Multitasking. In the example two situations are shown, the first with the various reminders in one display and the weather in the other, while the second one is purely multimedia, with a film being played in the first display and the catalog with the search in the second. It is important to note that LG also wants to highlight the possibility of using the Dual Screen both vertically and horizontally.

The fourth image illustrates the potential of the second screen in gaming, usable as a controller or to manage chats or a guide during the execution of a game. The fifth image is dedicated exclusively to work situations and indicates how to take advantage of the LG V50 ThinQ 5G Dual Screen for greater productivity, with a document on the first display and the keyboard on the second, or with notes and a document in PDF view.

The sixth image is dedicated to shopping, illustrating how you can watch a tutorial or video in a broad sense on a display and search for the products used on the other. The seventh image is dedicated to business users and highlights the possibility of using a support chat and the app to manage the bank account, simultaneously, or to perform trading operations with greater efficiency.

We arrive at the last two images dedicated to the Dual Screen of LG V50 ThinQ 5G. The eighth shows the possibility of making a video call while using other apps at the same time, such as the calendar, or starting a chat together with the maps to organize an appointment more easily, while the ninth focuses on photography, with the possibility of seeing three previews or editing on the second screen. In reality, there is yet another image, the tenth, but the latter only represents the operation to be performed to remove the flip cover.